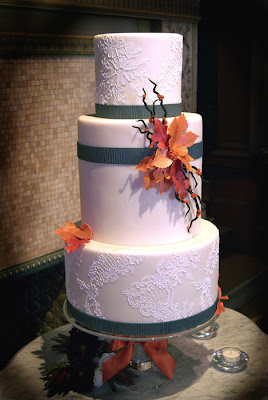 From my first day in Kindergarten, my mom knew she had it made.  My parent teacher conferences were a "break" for my teachers.  They'd invite me in with my mom and just have a nice 20 minute break to chat and relax before the next parent showed up to have to reckon with their certainly "unruly" child's behavior.  I liked it that way.  I liked boundaries, order, and instruction.  When I got to college, I went to my classes, studied, turned in assignments on time, and when I got my first semester's grades, I was thrilled to see that I got straight A's.  And all was right with the universe.  You follow the rules...you are rewarded.

Then I met my future husband.

Brian was smart.  Maybe a little too smart.

While I was toiling over my studies every Sunday night, he was drinking beer and watching The Simpsons with his roommates.  My neurotic sense of inflexible deadline was completely rocked when I saw him get an extension on his final project for his painting class for not one, but TWO full semesters.  He rarely studied, never did homework, and still got good grades (all A's and B's).  He frequently calmed my overworked nerves around finals with the words of wisdom "nobody cares what your GPA was once you graduate" and he introduced me to the motto "It's easier to ask for forgiveness than permission".  And it worked for him just as well (if not better) than my rule following worked for me.  He got busted selling unlicensed U of MN Basketball t-shirts outside of Williams Arena.  He ended up parlaying it into a meeting with the University that resulted in them selling his t-shirts inside the Arena, and at their Hockey venue as well.  That Art Professor not only let him extend one painting across two semesters, but gave him an "A" and went out for drinks with him.  I couldn't decide if all of this made me hate him, or made me overwhelmed with attraction for him.  So I married him.

Just after we were married, I was miserable.  Not in our marriage...that was the best decision I ever made, seriously.  It was my job that was eating me up.  I was working as a photographer, and doing quite well.  I had won some awards, I had been promoted to head photographer between two studios, and was doing what I had always wanted to do.  But it was a nightmare.  As a small business owner myself, I can tell you that as a group, we are the most difficult, megalo-maniacal group of humans on this planet.  We rule like unchecked dictators, and frequently bash our employees for just being in the line of fire of a bad day.  And a rule follower like me, working for a typical small business owner, is not a good thing.  I took every criticism as a personal attack.  The slightest confrontation made me lose my nerve, and I just couldn't handle it anymore.  That's when Yin to my Yang, my husband (The Goo, The Captain) said to me one night.  "You should just quit."

Just like that. No grand presentation, no parting of the skies and thunderbolts, just a simple idea.  And with that, I realized that I had never considered that as an option.  Rule followers don't quit jobs.  But once he suggested it, it was all I could think about.  It was like an open invitation to the Dark Side...the Rule Breakers.

So I gave one month's notice, trained in my replacement, and with absolutely no culinary training,  opened Gateaux Inc.  Nothing that I would have ever considered without being married to Lord Vader himself.  Second best decision I ever made.

But what does this have to do with this beautiful lacey cake?  Plenty, my cakey friend, plenty.

We had a lovely meeting to design a cake for their beautiful fall wedding.  We would incorporate Gunmetal grey, Persimmon, and Orange into the Gum Paste leaf medallion on the middle tier, and copy the incredible Alencon Lace from Catie's wedding dress on the other two tiers. 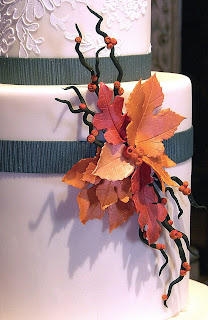 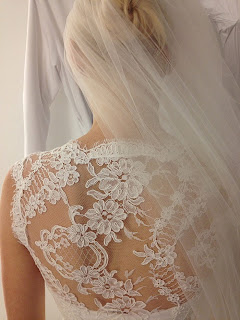 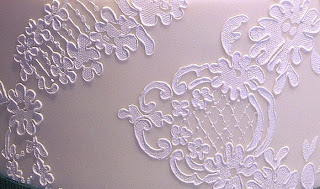 We made sure that they would have enough servings for all of their guests, and added a little sheet cake for the kitchen to start in on while the wedding cake could still be on display, and had a nice conversation.  I'm always flattered when someone who is in such a challenging career takes an interest in my work, so I was thrilled to field some questions from Chris.  He asked some of the usual questions like: How long does it take you to decorate a cake like this? How do you get the veining pattern on the frosting leaves? How is a cake like this cut? and What makes the Gunmetal fondant sparkle?

I fielded these questions with ease: About 60 hours. We have veining mats that are cast off of real leaves.  The cakes are unstacked before they are cut.  Ground Mica blended with Vodka to create an edible sparkly "paint".

And so, we parted ways until the wedding.

The wedding was on a perfect fall day.  They had the reception and ceremony at the Van Dusen Mansion in Minneapolis, a perfect location for an intimate classic wedding.  We stacked the cake with the aid of the couple's niece, who was waiting around between pictures and the ceremony, and sent her off with a hand full of extra frosting leaves to delight the other guests.  The couple was thrilled with their cake, and sent a gracious email to thank us for our hard work.

Several months passed, and I sent out an email to some of my clients asking for cake cutting photos.  Valentine's day was approaching, and I thought it would be fun to do an album of all of our couples from the previous year with their cakes on our Facebook Page.  When I got the email back from Catie, it had more than one photo, and this note:

I'm sending two of my favorite cake-related photos from our wedding at the Van Dusen on October 20, 2012.  In photo #1, I have a horrified expression on my face because my husband thought we were supposed to take the cake apart before we cut it, so he had just picked up the top tier right off the cake!  Photo #2 is shortly thereafter when we were still laughing about it... and actually cutting the cake. 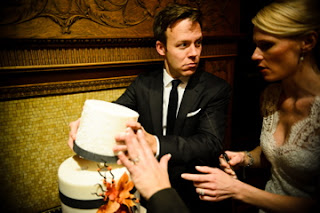 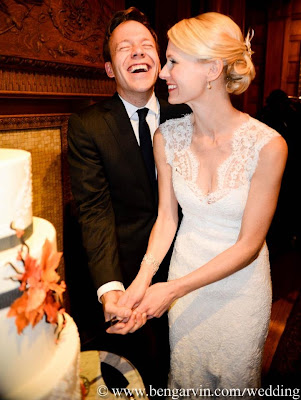 Oh. My. God.
My mind raced.  What on earth would possess a groom to do such a thing to an innocent cake?  Then it hit me.  He's a Rule Follower.  I thought back to our little Q&A session, and there it was.   He wasn't asking How a cake like this is cut.  He was asking "How do WE cut a cake like this?"  And I, thinking he was simply taking a pleasant interest in the nuances of cake structure and catering practices, rather than asking for literal instruction, inadvertently COMMANDED him to UNSTACK THE CAKE!!! And that is just what he, God Bless his little Rule Following heart, did.
I think the most impressive part of this is that he re-stacked it so expertly, that you can't even tell in the next photo that anything happened.  Well, besides the raucous laughter.
Many thanks to Catie for sending me what is my all-time favorite cake cutting photo.  And special thanks to the couple's quick thinking Photographer Ben Garvin for catching this on film.

The cake for Catie and Chris was a great project for trying out some new techniques.

The gum paste leaves were made using leaf cutters and mixtures of fall colored luster dusts.  I've found that there aren't readily available leaf veiners for a larger-sized maple leaf, so I channeled my inner Rule Breaker and plucked a Maple leaf off of one of the trees around the shop.  We washed the leaf in soapy water and soaked it in our sanitizer sink.  Once it was dry, we used it to imprint the larger leaves.  It worked fabulously!

The Ribbon detail was airbrushed with Moonstone Luster Dust, available at most any cake decorator supply house.

For Catie's lace, we created two custom Alencon Lace stencils.  One that captured the unusual cartouche pattern on the back of her dress, and another that replicated the Floral pattern.  Both of these are now for sale on our Evil Cake Genius site HERE

Once we stenciled the pattern in royal icing, we overpiped the edges and added some of the lattice pattern piping in the center of the cartouche.  It is truly the most beautiful lace I've ever replicated on a cake.