Emily, Adam, Gatsby and the Stars

I have met in the streets a very poor young man who was in love. His hat was old, his coat worn, the water passed through his shoes and the stars through his soul”
― Victor Hugo

Sorry for getting all literati on you guys, but The Evil Cake Genius is a sucker for for Victor Hugo. I'm also quite the Astronomy buff, every science credit in my Bachelor's Degree is Astronomy related, from 101 to Comparative Planetology, it is the artist's science in my humble opinion.

But onto Emily and Adam. I was surprised when I met them, to hear that they were having an outdoor wedding reception in August, but they weren't interested in a garden theme. Just when you think you've got people pegged...
They, instead, wanted a cake that would reflect their evening under the stars. And, I, for one, couldn't have been happier. We've never done a celestial themed cake before. We've had our share of starry cakes, but never one that embodied the Minnesota Night sky. So we got to work. The general idea wasn't to create a literal scene of Lake to Sky, but rather to incorporate the essence of the two.

I had seen a cake with fondant collars on the ledges before. Definitely meant to be waves in that cake decorator's vision, but I showed it to the couple, who instantly knew what I was thinking...the Auroura Borealis. We would use this general shape for the silhouette, but add some other references to solidify the theme. The ceiling of their reception tent would be lit by star-shaped lanterns, so we decided to top the cake with a frosting North Star in the same shape. We added silver dragee stars to the sides of the tiers (see if you can spot Orion, the Big Dipper, and even the couple's sign, Cancer) and then some shooting stars on wires to keep the celestial party going. Luckily, their wedding colors were deep blue with pink accents, so we decided to have the cake's color get deeper as you moved to the top tiers, travelling further into the night. All that was left was to add some of the pink color, but how? Simple, Lake to Night Sky...Waterlilies. I just love the sound of that...Waterlilies dancing across the milky way...Good morning Starshine, Lucy in the sky with Diamonds, Sweet Judy Blue Eyes, dude, I'll trade you my sweet tye die shirt for a grilled cheese, wait...just had a college flashback. Well, whether you inhaled or not, you can't argue that this was going to be one spectacular cake. 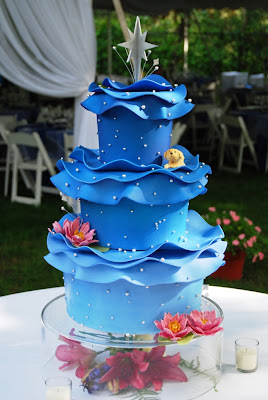 But we can't forget about Gatsby...As it happens these two started a family a little early, by adopting their first fur-baby. When we met to go over details a few months prior to the wedding, Emily added a frosting replica of their new puppy to the cake (supporting the ASPCA in the process with her donation, thank you!) I've done lots of these little frosting pups over the years, but Emily's idea had me laughing out loud. They wanted Gatsby to be swimming through the waves of the Milky Way on the cake. Of course, I agreed, and figured out how to accomplish this later. 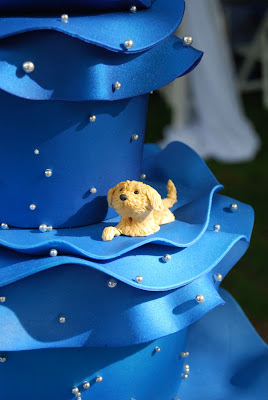 She also added a surprise groom's cake for Adam. An awesome cake shaped like an old Eagle Scout back pack complete with all the things he loves, his two cats (one hiding in the backpack, with just it's tail poking out, and one clawing it's way out) leggos (man after my own heart) and frisbee's. This cake would be kept inside, and carried out by the caterers at the appropriate time to surprise him. Which...cake fans...sort of explains why I completely gapped taking a photograph of it. Argghhhh...We'll update this post once the professional photos come out...promise.
Posted by Evil Cake Genius at 5:50 PM 2 comments: 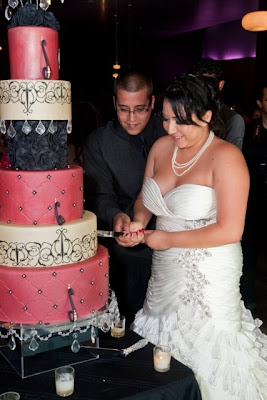 I'm a control freak. A serioiusly, over the top, mind-numbing control freak. Ultimately, this works out favorably for my clients. After all, it's a good thing to have a cake lady that won't let your caterers pick up a stacked four tier cake and move it just because they thought it would look better in the far corner of the room. Well, I can tell you for sure, that while it may look better over there, it wouldn't look better smashed into the carpet, which is likely to be its actual destination if they try to move a 120 pound cake after it has been stacked for over an hour. Let's just say that flexibility is not my strong suit.
That's why I am in total awe when I meet clients like Jahaira and Adam. They came in with their coordinator, Sarah from Lasting Impressions, and pretty much gave me Carte Blanche to do what I wanted to do for their invitations and cake. Well, actually not Carte Blanche. More like Carte Rouge...you see, the only thing they really wanted was that the invitations, the cake, the decor, etc. be wonderful and glamourous, and...not white. They'd seen it all before...white linens, white draping, white invitations, white, white, white. So, other than Jahaira's wedding dress, they wanted to shake things up a bit, and do the rest of the wedding in Red and Black. How this would be accomplished, would be up to myself and Miss Trotter to figure out.
I love it when people do this. Hire people that you trust, and let them run with it. While, I couldn't do this for all the Xanax on the planet, I really do appreciate those who can. Jahaira and Adam have great taste, a fabulous sense of style, and most important the wisdom to let the people around them do their jobs without interference.
What's funny, is that you'd think this would be easy for the vendors involved, but it's not. I see a lot of weddings, so when you ask me to do something I haven't seen before, that says a lot. We needed something to set the invitations apart. I had seen rhinestones on invitations, ribbon, and even feathers, so we started looking, not in our invitation catalogues, but everywhere else. There had to be something new out there. And we found it. A pulled ribbon rosette. Beautiful...but not for sale. Merely a suggestion. You know, like a serving suggestion. Like on the box of frozen waffles, how the picture on the front has a beautifully toasted waffle, topped with melted butter, maple syrup poured from a silver basin, and fresh berries picked at the peak of perfection....all served on fine china with a single rose along side the plate. Look closely at the bottom right corner of that photo, you'll see the words "serving suggestion" printed there. As though we all expected that box of frozen waffles to contain all the necessary ingredients for that lavish breakfast, and we may just sue the waffle company when we open our weary morning eyes to a burnt waffle on missmatched stoneware, topped with "syrup" from a god-only-knows-how-old bottle of Log Cabin that we dug out of the back of the cupboard, then had to run under hot water for ten minutes to get the top to open. Garnished with...oh hell, who garnishes a toaster waffle? But I digress. Not unlike the serving suggestion, the beautiful ribbon rosette would take time, and lots of it. So, given Carte Blanche, we don't need to even show this to Jahaira... but we do. Come on, have you never read this blog before? ...of course we do, we thrive on this stuff! 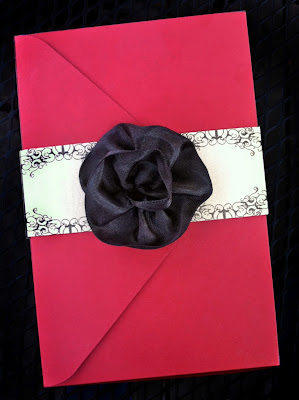 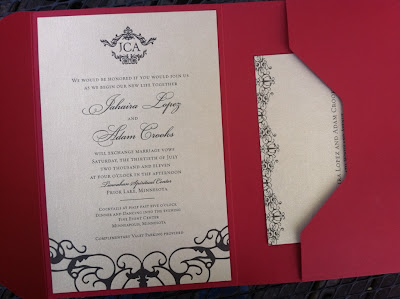 Needless to say, they loved our ribbon rosette idea. They loved the invitation design, with not a shred of white on it, even the envelopes were black. Upon Sarah's suggestion, we added Menu cards with the heading "Eat", little printed flags mounted on swizzle sticks for the bar that said "Drink", and monogrammed napkins that said "Be Merry". Thanks to Bjorn Messner
for the shots of the menu cards and our beautiful couple. 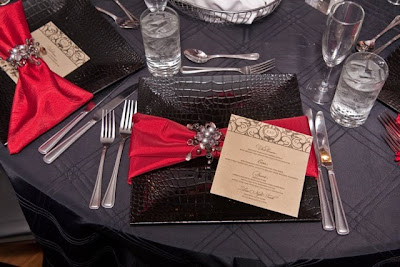 After that, the cake was a gimme. We copied the invitation colors, motif, monogram, and even the rosettes, this time made out of gum paste. We made it big, we made it sparkle, we made it NOT WHITE! 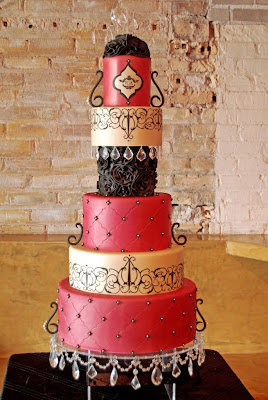 Jahaira was so excited about the cake design, that she commissioned a surprise groom's cake for Adam. We incorporated his favorite things, cigars, good Tequila, and the Godfather movies. Best part, the top tier isn't a cake, it is a molded chocolate bowl, filled with rice crispie treats, and topped with royal icing "popcorn". Even the Godfather DVD is chocolate. But my favorite part is the Tequila worm making its way up the frosting bottle wearing his top hat and bow tie. Damn I love this job. 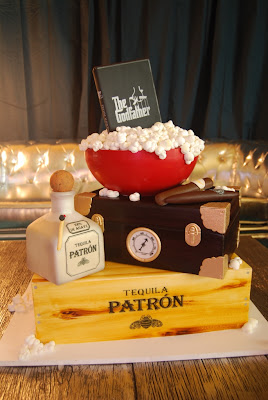 So, they ate, they drank, and they were married. A lesson in letting go? It worked out for these two, maybe I should...ahh, get real, I can't even eat a toaster waffle without breaking out the fine china.
Posted by Evil Cake Genius at 5:26 PM 3 comments: