Anyone who knows Gateaux, knows that we take full advantage of those talented and supportive friends and family that we're blessed to be surrounded by. My own Mom takes great pride in finding me vintage cake plates at auctions, Jenna's boyfriend, Kyle is always around fixing things at the shop (I don't even know if his dad is aware that we have absconded with his band saw) and nothing would get done if it weren't for the incredible support of my husband (the Goo) who takes on the role of personal chef, dog-daddy, and personal therapist during the busy season every year. But one name stands out among many of our clients...Magic Phil. My retired father in law, who now spends his time helping everyone in the family with all things that may need fixing, is also a wonderful woodworker. He's been responsible for many of our cake stands, and has expanded his skills into stone mason, and Acrylic stand manufacture in the past several months.

Needless to say, when Phil turned 70, there had to be one hell of a cake! 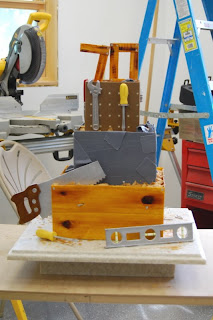 We had the party in his workshop (something he finally built after years of dreaming about it). And what more suiting place for the handy man's party. Friends and relatives came in from all over the country, to hide in his workshop awaiting the chance to surprise him with a party and wonderful tribute to the guy who can fix anything.

We had a blast making his cake. First of all, how often can you make frosting duct tape and nails? Second of all, we got to actually wing the design, something that NEVER happens with anal-retentive me handling the orders. Everything was edible, of course, from the screw drivers and level, to the duct tape, peg board, and wood veneer. Best part was watching Jenna set up the cake with one of my nephews, Nick as foreman of the project (he's the one donning the hard hat). 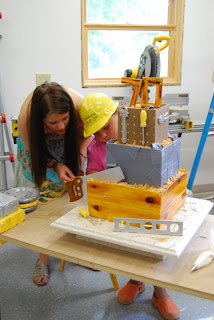 The party was a good time. Best part was listening to people as we sat in a circle and they told their favorite "Phil fixed it" story. It's inspiring to hear how one person can touch so many, and make every one of us feel like he's all ours.
Posted by Evil Cake Genius at 5:53 PM 3 comments:

Haven't posted in a while. Turns out the cake universe decided to throw us a little curve ball in the middle of our busy season, so we needed to get a few things straightened out before getting back to the fun stuff.

Short version...good refrigerator gets repaired for not holding proper temperature...becomes CAKE KILLER. Thankfully, no casualties, but two weeks of incredible uncertainty and drama as to if we would be able to continue to create the cakes that we love without risking their soggy demise in every commercial fridge we've tried. Thanks to the support of our ring of talented, tenacious, and fiercely loyal friends, family, fridge-tech, and cake nerd/diva network, we seem to have figured out a solution to the problem. Much thanks to the support of the staff at Colette's cakes, Kerry Vincent, Todd the awesome Fridge Tech, Dave the other awesome fridge tech, the staff at Appliance Smart, Envirotech, Redco, and of course, my awesome husband, for driving all over the twin cities with test-cakes and hygrometers.

Now, back to the fun stuff! 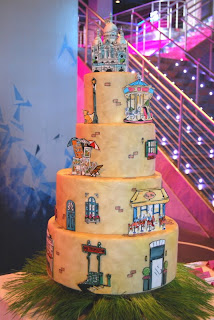 Ingrid and Jason were engaged at the top of Sacre Coeur in the MontMartre arondissement of Paris. They called looking for a cake in the shape of that awesome cathedral, but having been to that part of Paris, myself, I knew we had much more to work with. Turns out...on a five day trip to Paris for my tenth wedding anniversary, my husband naively trusted my navigational skills to get us to the airport via the Metro. We were well on our way, until he realized that I was taking us to Orly, when we actually needed to get to Charles De Gaulle. Tee hee. The upside to missing your flight out of Paris...missing your flight out of Paris! We found another hotel, threw down our bags, and headed of to see MontMartre. Best accidental vacation day I've ever had!

Now back to our lovely couple. Turns out, they adored that particular neighborhood of Paris as well, so we decided to top the cake with Sacre Coeur, but let the cake represent the fabulous hillside that makes up Montmartre, complete with its open air art market and quaint cafes. 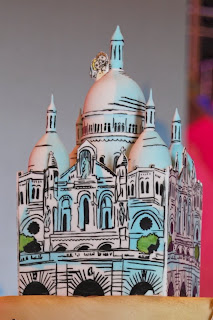 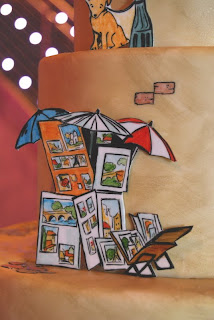 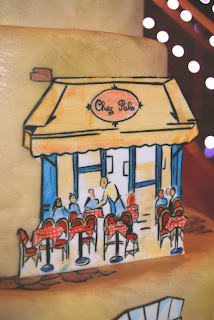 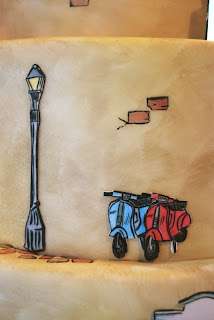 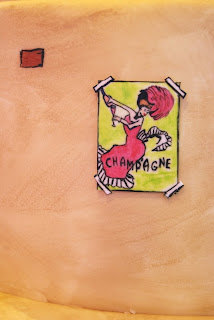 We added a couple of personal details, like the couples darling doggy "Polo" tied to one of the lamp posts, as well as the actual hotel that the couple stayed at in Paris and the Carousel at the foot of Sacre Couer that they took a spin on after he popped Le Quesion. All done in a new technique that we came up with while working on a cartoon-style groom's cake shaped like Texas. 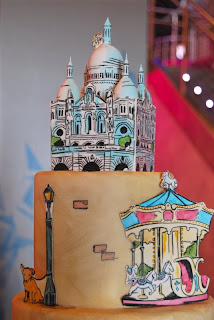 It took a lot of vision to translate the little cartoons from the grooms cake into a Paris-themed wedding cake, but Ingrid and Jason really embraced the idea, and I must say, this was an absolute joy to work on!

We had such fun painting the panels, that while in "fridge hell" this past two weeks, I seriously considered retiring from cakes and taking painting lessons instead. Fortunately for my clients, employees, and the sanity of my husband, I'm still on the job.
Posted by Evil Cake Genius at 10:42 PM 5 comments: