Okay, this was just about the coolest take on a "black tie" wedding I've seen in awhile. When I first met with Krista, she showed me a picture of her dream cake from a magazine. We, of course had to tweak it to make it her own, so we changed the colors of the cake to match her Black, white, and red color scheme. We also turned the cake into a torted five-tier tower, and topped it with a frosting monogram. 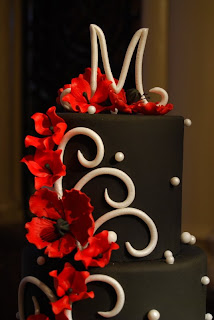 It wasn't until a couple of weeks later, that she mentioned that maybe the cake should be black with white details and red flowers. Now you're speaking my language! The upside...an amazing, unique and dramatic winter wedding cake. The downside...turning 20 pounds of chocolate fondant black. Needless to say, Jenna and I got quite the upper body workout, and had food-colored hands for 3 days straight(that stuff colors more than just food). But it was all worth it. This was hand's down one of my favorite cakes in years. I just love the chance to produce the unexpected, especially when the unexpected is so incredibly tall that it is visible clear across the ballroom! A ballroom impeccably decked out under the guidance of the coordinating genius of Joan from Ambiente Design Group, one of our favorite planners (and mom to Max and Coco, every one who knows Gateaux, knows we're a collective puddle when it comes to cute doggies). 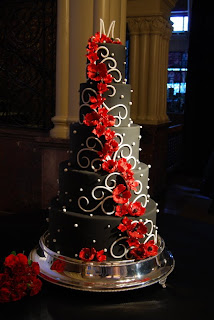 Here's the best part...these guys were nice enough to let their photographer the fabulous Olive Juice Studios release photos to all of us hard-working vendors so that we could strut our(and their) stuff. Thanks guys, you're the best! 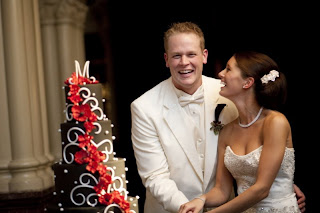 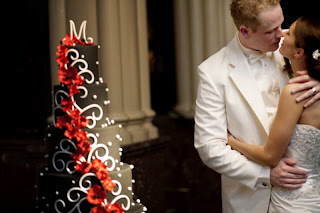 But our bride wasn't done with me yet. A surprise groom's cake was in order as well. You see, the groom travels a lot for his job, is a native Canadian, and proposed to the bride, while in Hawaii, by writing his proposal in the sand. Sounds like a lot to get onto one cake, but when the cake looks like a stack of suitcases, it's hardly enough. 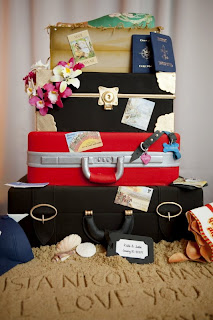 So we added a couple of frosting dog collars and tags peeking out of one of the suitcases to honor the bride's dogs who come along with them quite frequently in their travels. The top tier, let's just make it into a cake shaped like a crate holding another cake shaped, and hand-painted to resemble their favorite champagne. For Canada, we had to honor the great northern tradition of Ketchup chips (don't ask me, just google it)a favorite Canadian delicacy of the groom's. For personal affects, we included frosting replica of the groom's Minnesota Twins ball cap as well as a copy (again, frosting)of his favorite AC DC money clip, complete with frosting canadian money. 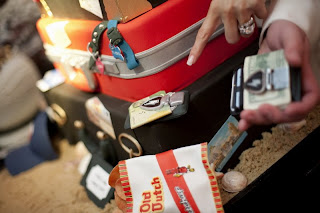 Set the whole thing in a base(hand made by my father in law "Magic Phil") filled with brown sugar and white chocolate seashells and you have it! Proposal and all. 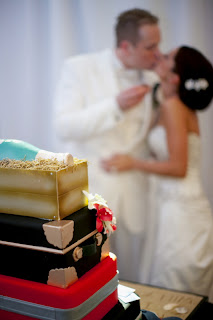 Looks like he liked it.
Again, thanks to Olive Juice Studios for the fab shots!
Posted by Evil Cake Genius at 6:33 PM 1 comment:

This couple had such a beautiful, tailored event style that when Kristen mentioned her ideas for Luke's surprise grooms cake, I nearly fell off my chair!

Let's start with the invitations. We copied an engraved motif from their Kate Spade cake knife set to create a background graphic for their letterpressed invitations. Keeping with their chocolate brown and ivory color scheme, we dropped the motif behind the text in taupe ink. Once they were in, and stunning, we had to copy the same pattern onto their cake. We had sketched several designs for their cake prior to their invitation appointment (when the cake knife made its first appearance)but once we saw how beautifully the invitations turned out, I just had to offer them a matching cake design. 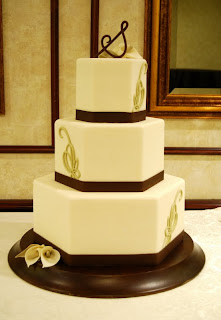 They loved the new cake design, so we switched over to it resulting in one of my favorite cakes of the year.

Now onto the craziness. Kristin wanted to surprise Luke with a cake in honor of his Alma Mater, so we sketched up a cheese-head shaped cake. As the secret appointment progressed, the cake developed quickly to reflect more about Luke than I ever thought a mere slab of cake/cheese could contain. We added the many sports he enjoys, their two pet cats, and then, the mob of neighborhood kids that seem to follow this poor guy around whenever he's out around their house. Kristen laughed about how Luke can hardly make it to their front door without several kids climbing on him asking him to come out and play. 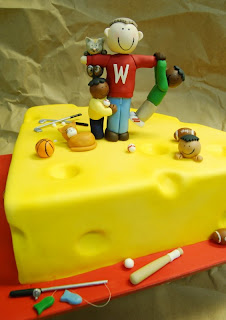 I'll take it! With my usual caveat, that trying to make realisting people out of frosting can often result in just plain creepiness, I set off to make Luke (widow's peak and all) into a frosting cartoon. The random kids followed. Every time we walked into the shop there was a new face peeking out from the baker's rack at us. It took about two weeks to make all of the varying parts, let them dry, and then royal-icing them together. Needless to say, the day after the Groom's cake went out, I looked over to my favorite baker's rack peanut gallery and was saddened by the empty space. We really miss the gang, but I suppose that's just incentive to do an equally weird groom's cake again soon, if for nothing other than the companionship.
Posted by Evil Cake Genius at 10:51 PM 1 comment: 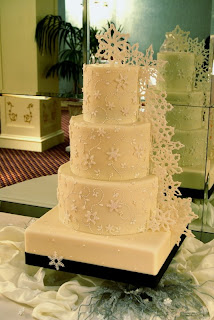 I just love a girl who isn't afraid of a little drama in design. Melissa had the most beautiful sparkling snowflake wonderland wedding reception at the Saint Paul Hotel. We incorporated the pattern from her wedding dress bodice on the top three tiers with one minor alteration, we added delicate little frosting snowflakes to the pattern. To finish off the design, a dramatic cascade of not only sugared, but edible glittered snowflakes.
Melissa and her sister/coordinator were not only fun to work with, but they were one of the most amazing duos of non-professional coordinators I've ever run across. These girls didn't miss a step. From the little added touches in decor, to their handmade invitations, the theme was carried through impeccably. My favorite little touch...the State Fair inspired appetizers. The groom proposed at the Great Minnesota Get Together (which I'm proud say, my own amazing husband has teamed up with me to earn the Blue ribbon in Raspberry Jam) so it only made sense to bring this one touch of summer into this otherwise winter wonderland. Got to admit, those corndogs smelled awesome in the dead of winter!
Posted by Evil Cake Genius at 7:04 PM 1 comment: