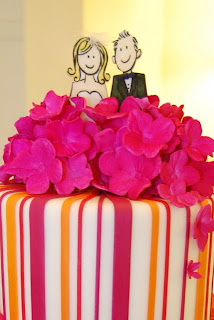 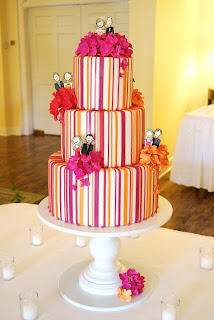 We first heard from Kimberly by way of her daughter/wedding planner Clare. It was going to be a wedding that brought together the bride and groom, but also their six, count 'em SIX children. Best part about it, all the kids (mostly adults) genuinely liked each other.

To celebrate this unusual wedding, Kimberly found invitations that included little cartoons of the kids, herself and Bob, and even the two family dogs (who also got along!)

Now, cartoons...that's something I can't pass up!

We designed several cakes, but all of them had one thing in common, frosting renditions of each family member. Only we decided to make them in color, and add their wedding attire. The girls at Flutter dress boutique were kind enough to get me swatches of the fabric from each of the girl's dresses, and Clare gave me email descriptions of the necklines, so that we could give them a little cartoon couture. 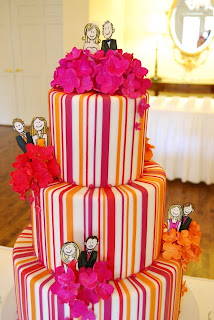 Finally, we added matching frosting hydrangeas, and stripes to make the cake as fun as its inhabitants.

Don't forget Maggie and Buster, who were hanging out in their own hydrangea puffs towards the back of the cake. 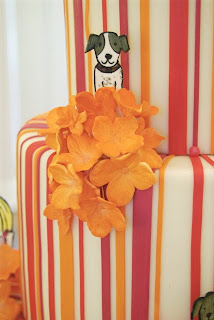 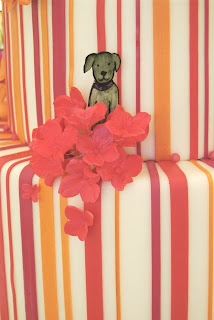 My favorite part, was watching the daughters and sons find themselves on the cake as they entered the reception site for photos. They really were a fun group. I'm glad to have had the chance to work with them on such a great occasion. 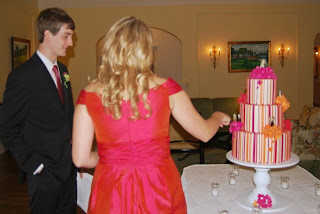 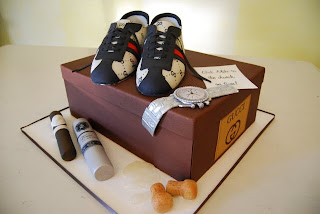 When Carly met Mike for the first time, she mocked him for his designer sneakers. Intrigued by a girl who wasn't afraid to mock Gucci, he asked her out. Fast forward a few years, and we get to make their wedding cakes, complete with a fully designer groom's cake!
Of course, we made those fateful sneakers out of sugar, but added a few of his other favorite things to the frosting mix...his watch, favorite cigars and some champagne corks. We've done single shoes before, remember "It was the shoes...", where we recreated Jan's leopard skin pump and Brian's van sneaker? But we've never had to complete a matching pair before. Those Italian shoemakers have my respect...matching pairs are a bitch to pull off!
For the wedding cake, we went with chic horizontal stripes. A tricky maneuver in it's own right, but loved the concept, so we went ahead with it. And covered the cake with frosting peonies, ranunculous and hydrangeas. Add a frosting version of they're beloved JR (look closely on the upper left ledge) and we get to make another fifty dollar donation to the ASPCA! 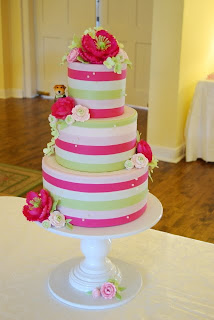 Unable to bring JR to the reception (unfortunately, canines are still discriminated against in black tie affairs)he, instead sprung for the favours. Each sweet little box included two chocolates molded in the shape of Milk Bones, and a note from JR. I just love the doggy people! 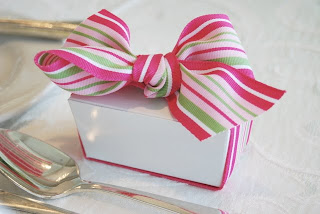 Sometimes the tiniest detail can turn into an amazing design scheme. This one started with the table linens. Kari didn't like the traditional white or Ivory linens that she'd seen at other weddings, so she chose a beautiful metallic taupe linen for her reception tables. That, coupled with the black bridesmaids dresses and touches of emerald green intrigued me enough to show her invitation options even though she had already chosen her wedding invitations (chosen, but not ordered). Once we switched the paper to a metallic taupe, letterpressed in black, and coordinated the menu cards, table number cards, etc. she was all ours! 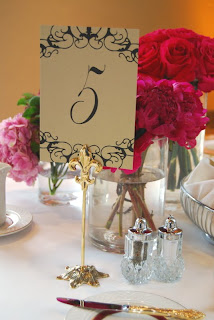 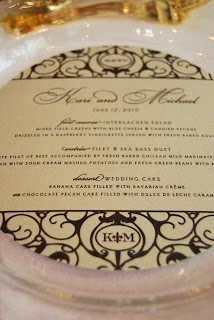 The best part...I'd been wanting to make a cake in that same color scheme for several months. I'd seen one by a company in Hawaii, and loved it. So the chance to copy Kari and Mike's invitation motif in black, onto a metallic taupe cake was one I didn't want to miss. Lucky for me, they let me play, so I added a vintage-looking pinstripe to the other tiers to really play off of the modern stacking that they chose. 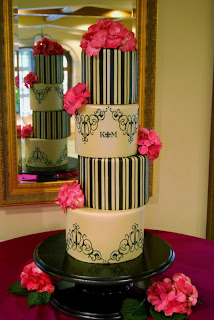 Add a few emerald green rhinestones, and their Fleur de Lis monogram, and there you have it. The most drop-dead glamourous cake I've done in some time!
Posted by Evil Cake Genius at 7:57 PM 7 comments: 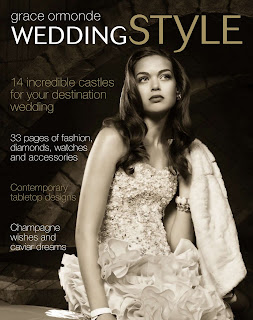 We're thrilled to have Dana and Idris's wedding cake featured in Grace Ormonde Wedding Style! The red and orange detailing was based on Dana's wedding dress embroidery (only her dress was in white and silver). Once we turned it into a line sketch, we realized that it looked like molecules. Pretty appropriate, as Dana is a Chemist! She even showed us videos of an exploding sink to prove it. I knew she was one of ours after that! 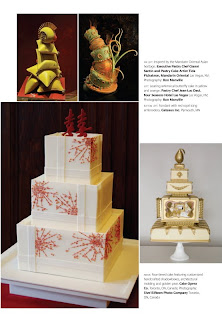