"For me its balmy airs are always blowing, its summer seas flashing in the sun; the pulsing of its surf is in my ear; I can see its garlanded crags, its leaping cascades, its plumy palms drowsing by the shore, its remote summits floating like islands above the cloud-rack; I can feel the spirit of its woody solitudes, I hear the plashing of the brooks; in my nostrils still lives the breath of flowers that perished twenty years ago."
- Mark Twain

I've forever been in love with Hawaii.  From the first time I caught a glimpse of it on that awesome two part episode of "The Brady Bunch" (yeah, I said it, cursed tiki necklace and all) to the last time I begrudgingly boarded the Wiki wiki bus to the departure gates to come back to my frozen home, it has never failed to amaze me.

What better, than to marry (pun intended) the most idyllic place on earth with the most romantic day of your life?  Jena and Jason were smart enough to combine the two...even better, they were smart enough to do so in the dead of winter, giving themselves and their closest friends and family an excuse to escape the cold Colorado and Minnesota winter.

Unfortunately, the cake lady didn't make the guest list, but I did get the next best thing.  The joy of channeling all of my Hawaii love into a cake for their Minnesota reception two weeks after the wedding.

The couple wanted a cake design that would acknowledge their Island nuptials, while not going so tropical in feel as to cause a mutiny among those Minnesotans who were looking at frosting orchids and sand while shaking the snow out of their high heels and dress shoes.  So, we created one of my favorite types of cakes...the trompe l'oeil.  The cake that doesn't look like a cake...a still-life in sugar!  We would make the cakes look like a stack of suitcases that had just arrived back from their trip.  An orchid lei resting on top of the stack, and my favorite, a frosting postcard that bears the post mark and date of the actual wedding. 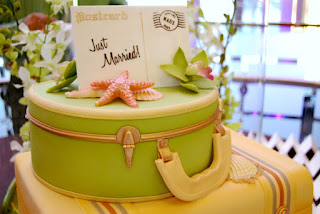 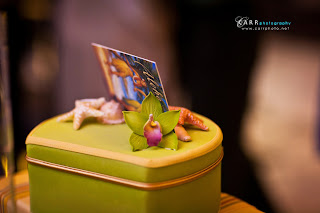 We've done suitcases before, but this time, we wanted something a little sweeter, a little more airy and dreamy.  So, I researched antique pastel suitcases online, and came up with a photo of a great suitcase cake to copy.  It wasn't until after I printed it out that I realized, it wasn't a cake at all, but an actual stack of suitcases (my first clue should have been that they were sitting on top of a dog kennel).  I showed this photo to Jena and Jason, who agreed...it wasn't a cake, but it needed to become one.  So we did a little color tweaking to include their cheery orchid green into the design, and the rest is cake-history. 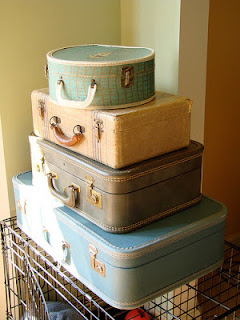 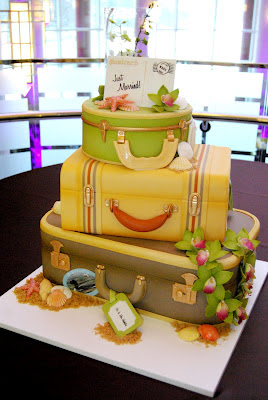 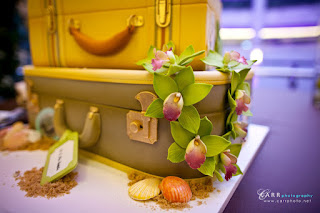 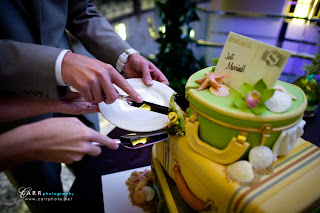 We set up the cake on a beautiful winter evening.  I rarely get to see my client's reactions to their cakes, but since this was a reception, no ceremony before to detain the bride and groom, they arrived early, and I got to catch a shot of Jena discovering her cake.  If her hands don't say it all, maybe the shot including the cake as a member of the bridal party does! 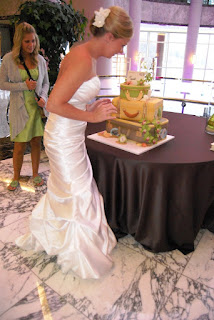 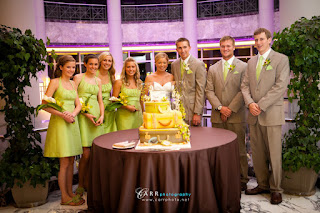 P.S.  Much thanks to the bride and groom for sharing their beautiful photos with us, and thanks to Carr Photography (even though we're still holding a slight grudge, that they got to cover the Hawaiian portion of the wedding as well as the Minnesota reception (we really need to open a Hawaii branch, Gateaux II, open November through March).