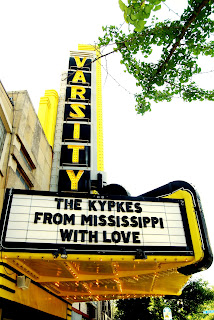 I'd like to spend this blog recounting classic film history, from Citizen Kane to Raging Bull...Orson Welles to Alfred Hitchcock...but I'll spare you my limited Film History 101 knowledge of the topic.

When I heard that Courtney and Josh had chosen the Varsity Theater in Dinkytown as their reception venue, I was immediately struck with visions of a cake that embodied the magic of old Hollywood.  They had already begun their planning, and the save the dates, etc. had the perfect amount of Hollywood "feel" to them, without crossing over into a theme party.

So when it came time to design the wedding cake, it was obvious that this wouldn't turn into a film-reel-shaped cake with frosting popcorn bursting out from every seam.  It would honor the less kitschy, side of the movies.

You don't have to study film history, to have your own film-history.  The movies influence our lives.  Whether it be something as profound and moving as "Schindler's List" or as ridiculous as "National Lampoon's Family Vacation" (bet that's the first time those two movies have been mentioned in the same sentence) the movies become part of our collective history.  Every family has that one movie that they can recite start to finish.  I remember bringing my, then boyfriend, "The Captain" home to meet my family, and the horror on my father's face that "the boy" had not yet seen "Young Frankenstein".  I laughed, and shrugged it off, but must admit, that when we watched the movie together for the first time, I then studied his reaction to it.  After all, you're not going to "get" my bizarre family if you don't roll around laughing at things like "Abby-Normal" and "Seda-give".  Thankfully, he got it.
I remember the shock I felt when I found out that my two Evil Cake Minions had never seen "The Shawshank Redemption" and the utter horror when discovering that they had no idea what "Trains, Planes, and Automobiles" was.  With our lack of joint "Movie-history" I'm surprised they ever understood a single word I said.  We have since made a list of Movies necessary to speak "Robin"...it's on the fridge at the shop.

Now, back to Courtney and Josh.  Their venue was more than a renovated movie theater, it was a landmark.  The Varsity started out as a Cabaret theater, featuring Vaudeville style acts.  It's diminutive size earned its nickname "The Dinky" which then spilled over to the neighborhood "Dinkytown".  In the late 1930's, it was renovated into a movie house, with its distinctive marquee and Art Deco design. 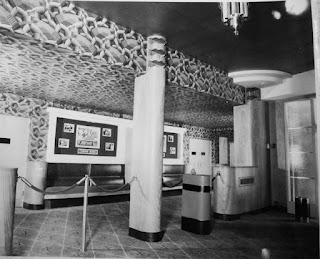 By the time I went to the U of MN, it had deteriorated into a venue for seedy bands (although, Greenday actually played there once).  Finally, the Loring Pasta bar bought it and renovated it into its current form.

The one constant in all that time, being its impressive marquee.  And that's exactly what Courtney and Josh chose to inspire their wedding cake.  But first, they needed invitations.  How about a modern twist on the marquee design in the invitations? 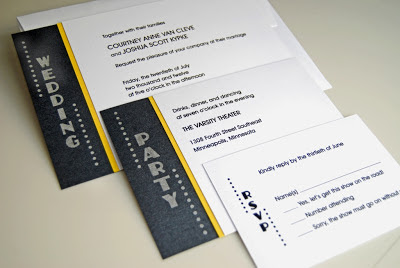 After that, the cake design was a snap.  We'd make the cake replicate the marquee, complete with the movie title "From Mississippi With Love".  The couple lives in Mississippi, and the wedding would be held in Minneapolis, so what better film title? 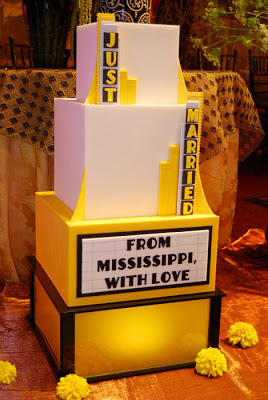 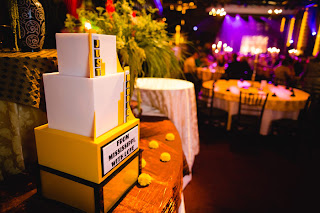 So, for this school principal and her pilot husband, they got their Hollywood ending.  And the cake lady got hers too.  This gracious note accompanied their photos.
"Our cake was absolutely perfect, and we can't thank you enough for our second-favorite moment, after saying "I do," of course!" 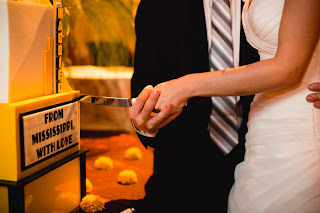 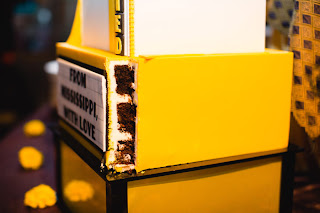 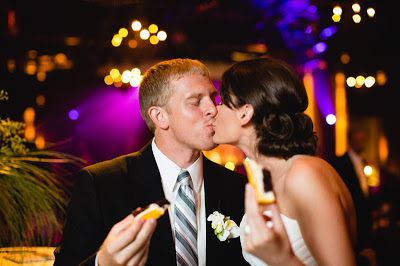