It better be a girl! 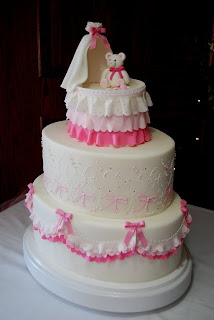 We met Cindy a few years ago, when she was hosting a baby shower. We made the most adorable patchwork jungle animal themed cake and cookies for that event. So, when she called this year, we knew we had our work cut out for us. This time, the shower was for her daughter...Cindy is going to be a Grandma! They already know it's a girl, and this shower is going to celebrate all things frilly, girly, pink, and precious!!
I'm in.
Cindy sent me a picture of a cake with three layers of garrett frills in varying shades of pink. It was a single tier cake and it had a frilly bassinette piped on the top of the cake. The cake was the perfect starting point to launch an amazing baby-girl-fest cake design. We changed the bassinette into a three dimensional bassinette, then decided that maybe the entire top tier should be the bassinette. We added a white teddy, a rattle, and a middle tier covered in hand-cut and piped eyelet. 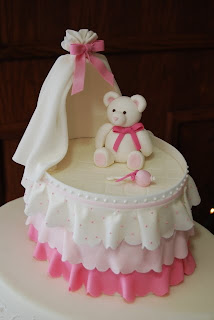 There are so many times when I have to restrict myself on wedding cakes. After all, they can't be too girly, there is a groom, after all, and the kiss of death to a wedding cake design is if I deem it to be too "baby showerish". For that reason, we had a blast, unleashing all the too girly, too delicate, and too pink for a wedding cake ideas that have been swarming around my cakey brain for too many years.
Add some precious bassinette shaped cookies, and some teddy bear ones (for the men at the party, a little less frilly, but just as delicious) and we were ready to roll. 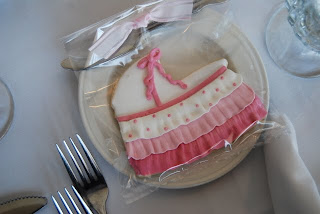 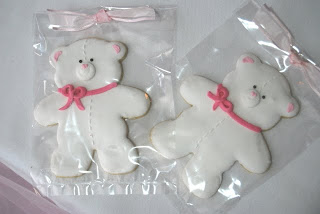 Now, I've seen some pretty awesome reactions to cakes in my day, but Cindy, well...she takes the cake. While trying not to peek until the cake was completely stacked, she accidentally looked up from her gift wrapping and caught a glimpse. The only reason I know this is because she let out a little shriek, and ran from the room. When the cake was ready, she came back in and was positively giddy. On the car ride back to Minneapolis (we delivered the cake 2 hours away) Jenna, my coworker, pointed out that she'd gladly drive every cake we ever made 2 hours away for a reaction like that. I can't help but agree. 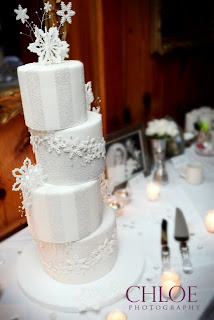 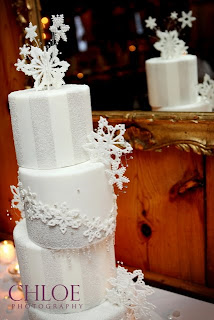 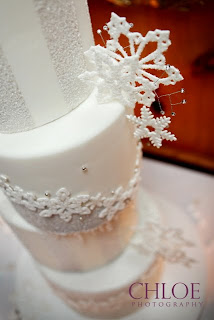 To finish off the theme, we provided snowflake cookies with silver sugar details as well. Our new recipe, my husband's Grandma Harriett's Casbah cookies. We don't know the origin of the cookie's name. Personally, I think it's because they "Rock the Casbah"...so delicious. 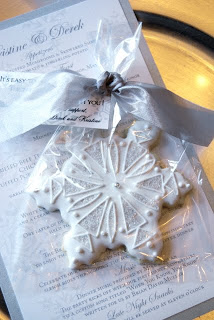 Thanks to Chloe Photography for these beautiful photos!
Posted by Evil Cake Genius at 6:04 PM 3 comments:

My Niece and Brides Magazine 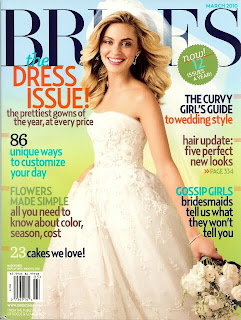 We're so excited to be featured in Brides Magazine's latest cake article. It's on the news stands now, but we've been waiting what feels like a lifetime since the photo shoot in October.

We've had cakes featured in Brides before, and really get a kick out of having our little beauties show up in such a great magazine. This one was particularly satisfying for a couple of reasons. First, they weren't promising that any of the cakes that were brought in for the feature would make it through to the final layout. Last time we brought one to them, it was in an article called "America's 50 most beautiful cakes". This time, they still had 50 brought in, but (much to my surprise) the cover of the magazine called this article "23 cakes we love". We're honored to have made the cut! 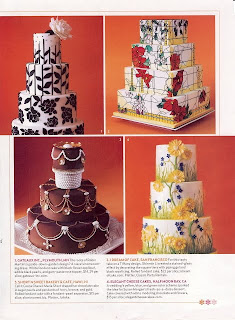 But mostly, we're excited to have this particular cake featured. You see, we often get calls from magazines asking for cakes, but they are usually tied around a particular theme. Rarely, are we allowed to simply submit whatever our little cakey hearts desire. This was one of those rare opportunities. Turns out, I had just seen pictures of my Niece, Megan in her Homecoming dress about a month before the shoot. I fell in love with the pattern on her dress, and seeing as she is completely awesome, I thought it would be fun to base a cake on her. 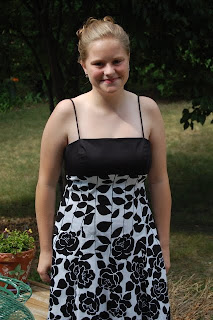 Of course, as all of these grand ideas go, there were a few bumps in the road. Well, not so much bumps, as just a really, REALLY long road. All of the Applique on that cake had to be cut by hand, with an exacto knife to properly imitate Megan's dress. Doesn't seem too daunting, until you start cutting out each individual petal, and then have to take them all apart, and try to eyeball them back together on the side of a cake. About 60 hours of labor later, Voila!

And you should have seen my face when the box containing one of the tiers got jammed in the x-ray machine at MSP international airport. Not a pretty sight (or sound) but the cake made it just fine.
Posted by Evil Cake Genius at 7:03 PM 2 comments: