Pop Rocks and Cats in Convertibles 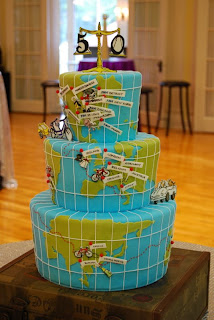 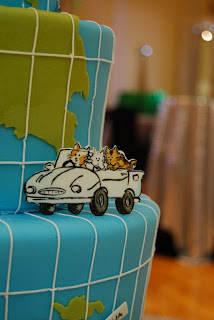 So we get this call from Lynn. Her husband is turning 50 and she's throwing him a party. He's a lawyer, but not "that" kind of lawyer she points out. As a matter of fact, he loves to bike. So much so that he's been on long-distance bike treks all over the globe. While these days, most of his biking is done on a tandem bike with his kids trailing behind in a burlee.

The cake was awesome to plan. I've never seen such an extensive list of countries to include in a jet-setter's cake. We made so many frosting location flags, that we were unsure we'd even fit them all on the cake. We topped it with the scales of Justice weighing his new age. My favorite element, however, was the frosting convertible (his gift from Lynn, not frosting, real) being driven by cartoon likenesses of their three cats.

The party was quite the fun 70's theme in decor, so we added a candy buffet of nothing but the finest candies the 1970's had to offer. Pop Rocks, Bottlecaps, Gobstoppers, Razzles (still haven't committted to whether they are a candy or a gum) Candy Cigarettes, and tons of other amazing candies that will bring you right back to your Bell-bottomed youth!
Posted by Evil Cake Genius at 7:23 PM 1 comment: 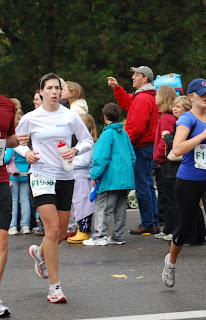 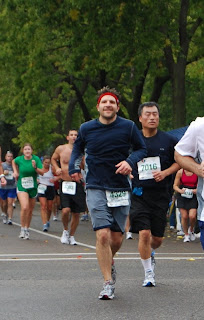 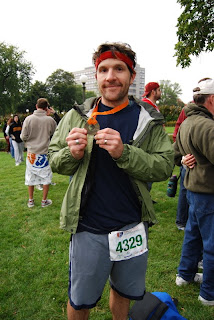 Any of you who have met with me know that I'm lucky to be married to an incredible guy. The Goo (Brian) and I have been married for 13 years, and he still amazes me on a regular basis. His latest, the Twin Cities Marathon this past Sunday. Wow.
He finished in 4 hours and 44 minutes. It was crazy cold and rainy, but he always had a smile on his face whenever I saw him along the route. The girls from Gateaux, and their boys showed up at mile 22 to show some much appreciated (and incredibly generous, on their day off) support. They're awesome.
For all of you out there who ran, my hat is off to you. I was inspired by every one of the thousands of runners that I saw that day. You guys are amazing! Speaking of amazing, one of our Bride's for this coming winter, Kristin Zinsmaster ran the Marathon as well. I haven't talked to her since the race, but I've heard she's quite the runner. If I remember correctly, she was going out with the group that was pacing to finish in 3 hours and 15 minutes. She'd cringe if she knew I was posting about her. She's quite modest about her abilities, and blushes every time I point out how incredible she is. She'll just have to get used to it.
My awesome personal trainer finished the race in 4 hours and 9 minutes. Sarah is an absolute stud-girl, running the marathon less than a month after her first Iron Man triathalon (which, for those of you who didn't know, ends with a marathon length run). She finished first in her age group at that event, and still returned to Minnesota to destroy my weenie-butt two days later. You know, she could have taken some time off after that, I wouldn't have complained.
My good friend, neighbor, and Speck's Uncle Steve (check out the blog he does for me when I'm away and Speck stays with him and Aunt Kathy at http://www.specktakesatrip.blogspot.com/) started the Marathon despite a nagging hamstring injury. Steve has run many marathons, this was his first Non-Finish. As long as he doesn't injure any muscles required to hand out treats, and administer tummy rubs, Speck doesn't care.
To all of you amazing people, thank you for reminding me what you can accomplish if you put your mind (and body, in this case) to it.

Posted by Evil Cake Genius at 10:37 PM No comments: