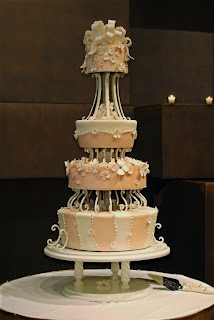 Christina was fun to meet with. She brought in several cake ideas from several sources, and we picked the best parts of all of them, combined them, and created our own over-the-top masterpiece. I love sessions like hers. What I don't love about sessions like hers, is that once she leaves, I have that moment of sheer panic when I realize that Cake Designer Robin has just SCREWED Cake Maker Robin.
You see, the main silhouette of this cake was based on a cake that Christina saw in the movie "27 Dresses". Easy, we thought...find out who made the cake for the movie, and they'll divulge where to find a stand that supports four tiers of cakey goodness while remaining virtually invisible. All of those little frosting scrolls between the layers look like they're holding up the next tier, but alas, they are merely gumpaste, and snap at the slightest provocation.
So I put my crack team of internet stalkers on the project. But everyone came up empty handed. It appears as if no one wants to take credit for the cake. We couldn't find any credit anywhere for it. So, we turned to our secret weapon..."Magic Phil". Now, anyone who knows cakes, knows that it takes a fair amount of engineering skill to pull off most designs, so how lucky am I that I married into a family with an electrical engineer. My father in law Phil is not only an engineer, but (and this is the important part) is also retired. The man can do anything, but most importantly, he loves a good cake challenge.

I gave him my wish list of what the stand needed to look like (invisible) and what it needed to do (hold about 75 pounds of cake) and he went at it. Two months later, he shows up at my house with an acrylic center post stand that looked like he'd been working in the medium his entire life. We set it up, oohed and aahed, and put it in a box until the week of the wedding.

The night before the wedding, we gave it a test run. The stand did exactly as promised. It held the cakes so that they were floating in mid air, it was spectacular...until anyone breathed near it...at which point it swayed like a jack-in-the-box. So after I regained consciousness, I sent the staff home, and called Magic Phil. What's better than an engineer? One who comes to your rescue at the drop of a hat. That next morning, he arrived with a load of various acrylic and steel tubing, and with four perectly sized clear supports for the 2nd tier, the cake was rock solid! We took that little beauty down to the reception, spent an hour and a half attaching all of its little frosting filigree "supports" and vowed never to do any cake that isn't a traditional direct-stack format ever again. Or at least until August.
Anyway, after all is said and done, I had a good friend look at the pictures who immediately came to the simple conclusion that the original cake on which we based this cake was probably a movie prop, and not a cake at all. The more I think about it, the more convinced I am that it is true. Oh well, maybe if they need a cake for "28 dresses" they'll give us a call. We've got the stand all ready to go.

By the way, here is Christina with her cake. I've seen a lot of wedding dresses in my day, but Wow! This one takes the cake (no pun intended). She's an amazing clothing designer, and made the dress herself. The bottom of the skirt was removable for the reception (her own engineering project I'm sure)and the dress turned into this sassy little cocktail number. 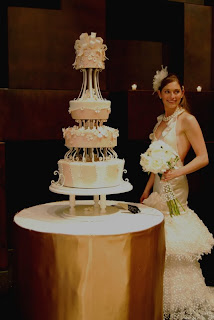 Most people would be shocked at how many "cake decorating" tools come from Home Depot. Fact is, I find the most incredible tools for my job at places that have nothing to do with restaurant/bakery supply. My newest adventure began when I met with Alex about her wedding invitations. We already knew that we would copy the incredible fabric rosettes from Alex's Monique Lhuillier wedding dress on the cake, but, once we picked the invitations, adding the beautiful motif and monogram to the cake became another priority.

I really had no idea how to transfer such a fine and intricate motif to a cake, especially if I wanted to maintain the delicate nature of the pattern. We've done lace and fine things before, but that is across an entire tier, and while this is one beautiful motif, it was just one element of an otherwise impeccably planned wedding, and we didn't want it to take over the entire cake. 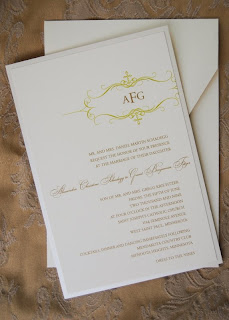 We decided to just use the initials, and skip the motif. Until two days before the wedding, when I spotted something in my office that had completely slipped my mind. About five years ago, I was meeting with a bride who had bought a personal screen print machine in order to print her own wedding invitations in metallic gold. I was so intrigued, that I bought one, looked at how neat it was...and stored it in that great abyss that is my office.

But, its time had come! At eight o'clock at night, with purse-on-shoulder, about to leave...I dragged the thing down from the top shelf and spent the next two hours shooting a screen of Alex and Grant's motif, and figuring out how to completely misuse and abuse the poor little screen printer so that it would print with frosting instead of ink, onto fondant instead of paper. 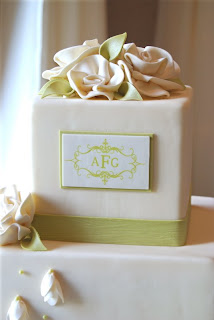 It took a few tweaks, but eventuallly, it worked beautifully. I called Alex, who said 'kay, and we adjusted her cake design accordingly.
So there you have it, add screen printer to the resume. Thanks Alex and Grant, for letting me experiment on you! 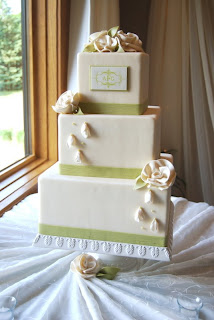 By the way, I had the pleasure of seeing them at the wedding. I've been doing this for thirteen years now, and have seen a lot of brides. But something about Alex in her gown reminded me of what it felt like to be dressed in all of those layers of silk and crinolin all those years ago. I just love a bride! All that joy, love and possibility in one fluffy white dress.
Posted by Evil Cake Genius at 6:43 PM 7 comments: