A Cake of His Own

We do a lot of wedding cakes. And that's just how we like it. But every once in a while, I realize that the estrogen level at the shop is getting a bit high. Every time we make a fabulous gum paste flower or frosting bow, it edges a little higher. By mid July, the bakery reaches female DEFCON 1, practically glowing pink with femininity, and I feel the desperate need to do something, anything, that isn't girly.

Thankfully, that's when Michelle showed up. Don't get me wrong, Michelle is plenty feminine. She's strikingly beautiful, and, might I add, she rocked her Maggie Sottero wedding gown. But, she didn't come to me for herself. She came to me for a surprise groom's cake for her fiance Tristen.

Imagine my joy, when she described him as a "man's man". Hallelujah! Even better, he's an officer in the Army...loves baseball, especially the Twins, and has a thing for Sam Adam's beer. 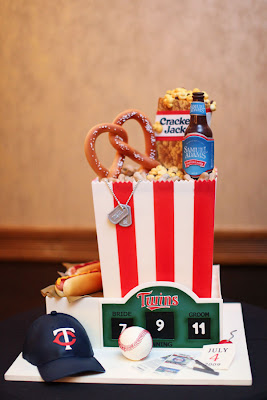 Michelle had a pair of Twin's tickets that she planned to give him as a wedding gift, so we decided to focus on baseball as a theme for the cake. Before we knew it, we had designed a cake that was all about peanuts and crackerjack rather than silk and chiffon. We added a pair of frosting dog tags in lieu of a frosting brooch, and, to honor their first date on the 4th of July, a few frosting firecrackers...can't shake a well-manicured finger at that, can you? 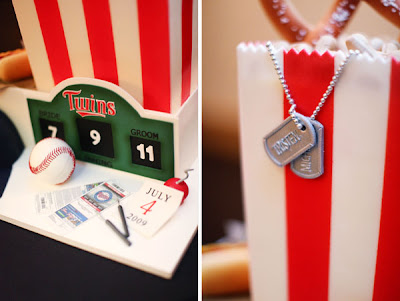 So we traded out our Katy Perry and Regina Spektor CDs for some Beck, and Sublime, and commenced a week of purely masculine cake decorating (no, that's NOT an oxymoron). There's nothing like molding a solid chocolate bottle of beer and baseball to cure whatever ails you! We even added a frosting scoreboard, with their wedding date as the score, a frosting baseball cap, and a pair of frosting hot dogs(with his and her favorite toppings). And with each stroke of the pastry bag, the threat of an all out Gateaux cat-fight-meltdown was diminished.

Michelle reported back that Tristen loved his cake (once he actually realized it was a cake) and it was the hit of the reception, especially with the guys. Thanks Michelle, we needed that....no, we really, really needed that.

Thanks to Michelle and Tristen's Photographer Kate Botwinski for capturing this cake in all of it's manly glory!
Posted by Evil Cake Genius at 4:12 PM No comments: 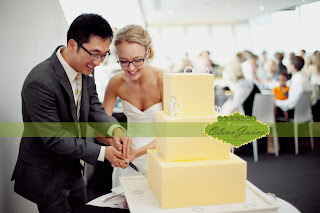 Anyone who's been in to design a cake at Gateaux, knows that it is a rambling unorganized mess of a process. And that's just the way I like it. I rarely know much about my clients before they come in to meet with me, shy of the basics...wedding location, color scheme, etc. So the design session is the ultimate cake show and tell.

Every once in a while, I'll pull a photo out of my overstuffed file of "cake ideas" before a meeting, if there is something that strikes me as particularly suited to a couple based on my limited knowledge of their event, but usually by the third or fourth minute of the appointment, my ideas have shifted so dramatically, that it never even sees the light of day.

Not the case with Nicole and Jim. They walked in with a photo in their hand of their dream cake. To which, I laughed, and pulled out my torn out magazine page of the exact same design. Easy enough. Or is it? Ask my husband (or my beloved doggie Speck) if I've ever been known to let sleeping dogs lie. NOT LIKELY.

Just because we all thought of the same cake, doesn't make it the right cake. Yep, it had the right color combination of pale yellow and white, and an incredibly sophisticated interlocked ring pattern on it, which suited the graphic nature of the couples style, with the minimalist design of the reception site (the Walker Art Center). But, the problem was, that it wasn't Nicole and Jim's cake, it was Martha Stewart's.

So, we dug through the rest of their idea file, looked through my portfolio of cakes, and before we knew it, we had four alternative designs. Several of them kept the ring pattern, but oh, what incredible depth it added to make the back row of rings charcoal grey (their accent color) and what about changing the tiers to square? If we stack the tiers asymmetrically, maybe the pattern shouldn't wrap all the way around the cakes? When they left the appointment, that original "perfect" design had transformed into THEIR cake. 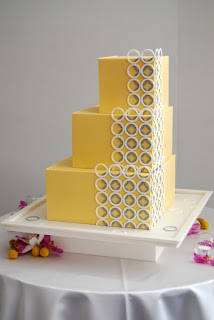 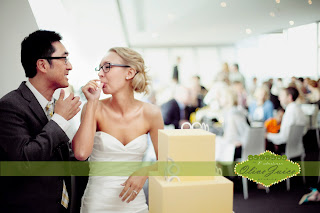 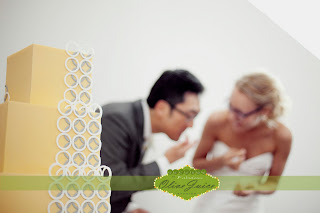 But that wasn't all. They wanted to go all out with a dessert table. Still on a design high, we sketched up desserts decorated with clean graphic patterns to compliment the cake design. Nicole had a collection of fabulous cake stands and trays, and we had our own "Magic Phil" make us two tiered square plateaus to wrap with groovy paper provided by the ever-talented Mimi Designs. On Nicole's suggestion, we added pink and blue to the dessert color scheme to make it more inviting and fun. 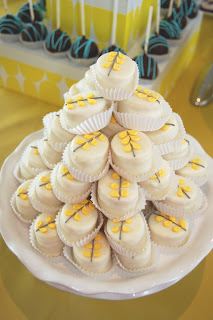 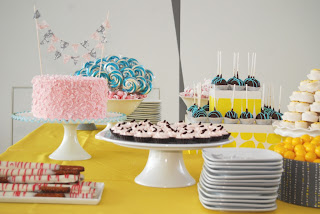 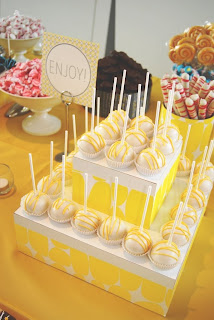 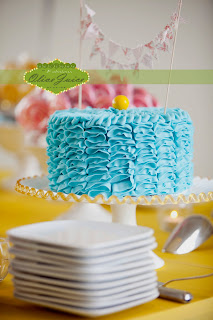 And she was right, I had a hard time keeping myself from digging into that table during the set up. Okay, truth be told, they may have been shorted a yellow malt ball or two. Or three.
Posted by Evil Cake Genius at 3:50 PM 2 comments: 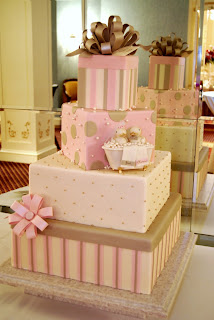 During a wedding cake consultation, I often ask about how the groom proposed. Not necessarily for cake inspiration, but simply because I'm a bit of a busy-body, and a lot of a romantic. You can imagine, in sixteen years, I've heard just about everything. Gateaux clients don't lack in creativity, so I've heard tales of proposals on mountain tops, beaches, famous Paris Churches, on Safari, in jail (they were both working as guards, don't worry) and even an elevator.

Just when I thought I'd heard it all, I met Sara and Dan.

We pretty much had their cake designed. They came in with a picture of a cake made by Confetti Cakes in New York...one of my favorite cake shops. We knew we wanted to add a few tiers, and tweak the design, but for the most part, we had it figured out. Then, to pass the time while I was drawing hundreds of tiny stripes and polka dots on the sketches, I floated the proposal question.
"I had to propose in a bathroom" was his answer. Which begs the question "...and she said yes?" as well as "Were you trapped under something heavy in said bathroom?"and "Did you lose a bet?" and most importantly "Does your mother know?" The answers to which were "yes", "no", "no", and "well, yes, my dad proposed to her in a bathroom as well".
Turns out, our boy Dan had a bathroom legacy to uphold. As the story goes, when Dan's grandfather arrived at his future wife's house on the night he was planning to propose, he rang the doorbell, and when her parents came to the door, asked "Where's Minnie?" When they told him she was in the bathroom getting ready for their date, the poor kid just couldn't stand the wait, and went into the bathroom, got down on one knee, and proposed to a surely unsuspecting young Minnie.
Since then, in the spirit of giving that poor man a hard time, each of his sons and now grandsons have proposed to their future wives in, you guessed it, in the John.
You will be happy to know that Dan's proposal was quite elaborate, involving flying in Sara's best friend to surprise her, setting up the woman at the jewelry store to give her a room key to a suite at the Saint Paul Hotel, arranging for both of their parents to meet the next morning for brunch at the hotel, and.....proposing in the bathroom.
Now, all of you that know, and hopefully love, the cake lady, know that there's absolutely not a chance in heaven or hell that I'm going to let this go unrealized in cake form. So, I immediately began scheming with our couple as to how we could tastefully (key word here) incorporate this most unusual proposal into their cake. Dan was correct in assuming that a frosting toilet, was out of the question, but a frosting bathtub complete with bride and groom rubber duckies were absolutely on the table. Well, on the cake. 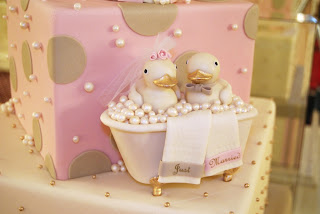 So we added a tiny frosting tub with two rubber duckies and a pair of his and hers towels embroidered with "Just" and "Married" to the cake design.
We delivered the cake to the Saint Paul Hotel for the reception and let the guests in on a long held family tradition in the process. 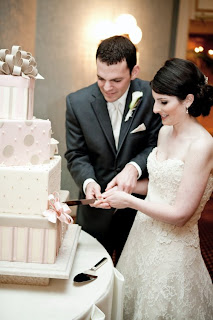 The bride later informed me that the hotel staff brought the tub to their Sweetheart table, and they dined with their frosting ducky counterparts at the reception. If you look closely, you can see them on the table. 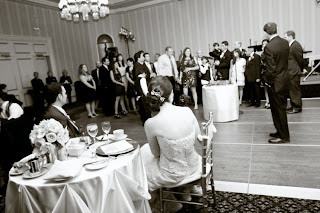 Much thanks to Kelly Brown for these wonderful images, and to the Saint Paul Hotel staff, for their incredible care and consideration in adding two tiny guests to the head table that night.
Posted by Evil Cake Genius at 7:03 PM 1 comment: