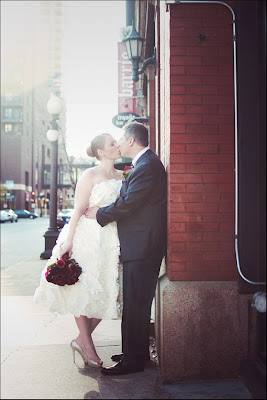 When Shannon met Noah he wasn't a "dog person". This phenonenon is not entirely foreign to the Evil Cake Genius...my own father-in-law/master cake stand maker "Magic Phil" is also not a "dog person". It always cracked me up that in a room full of relatives, most of which had dogs of their own, my beloved Speckster would ignore all of them, in favor of climbing up onto the back of the couch to lay there licking Magic Phil's ears. Clearly, Speckster doesn't understand the concept of "not a dog person" any more than her owner.

Shannon was definitely one to have her reservations about a non-dog person as she is, in the truest form, a dog lover. Shannon has her own pup, Sadie, but she also fosters dogs until they can find proper homes. An action that only the truest of animal lovers can take...to care for a pup in their time of need, accepting all of their challenges and flaws, making them one of the family, until they are ready to move on to their forever home. When asked by one truly impressed cake lady how she can let them go to their new homes, she admitted that it is incredibly hard, but it's what's best for the dog, so you do it. I can't tell you how much I respect and admire this woman.

Now onto the fun...
Everyone who knows Shannon, knows her love for dogs. So it was a natural fit for her to be interested in our "People Treats" favours. "People Treats" are molded chocolates in the shape of dog biscuits. Shannon had a great idea. Rather than boxing them as favours, we would attach them to everyone's place card. The heading on the place card would read "Sit", so that when the guest's sat, they got a treat. I like the way this is going. Classic conditioning for wedding guests!

"Why not have the invitations say "Come"?" I joked. And by the time Shannon's appointment was over, we had designed the most charming invitations I can remember. The invitations would say "Come", the reply card "Speak", and the accommodations card "Settle". 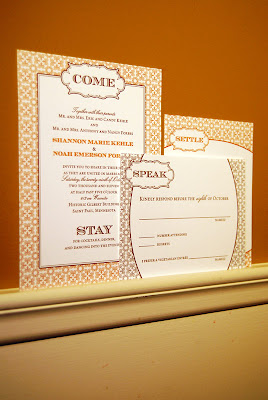 By the time they got to the reception, a placecard commanding them to "Sit" and a menu card asking them to "Stay" for a family style meal, would complete the theme. Many of you non-dog people might find it offensive to "treat your guests like dogs" but I assure you, I would gladly trade places with Shannon's Sadie, or my Speckster for a week's vacation. Other than he obvious issues I may have with doing my business outside, I'll take the treats, the naps, the occasional tummy rubs and a nice leisurely walk each day, thank you very much. 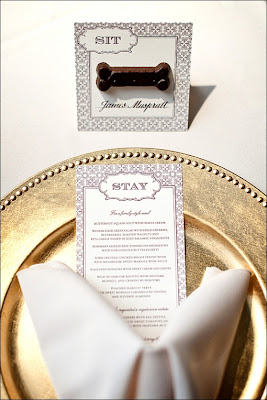 When it came to cake design, Shannon's dress was the focus. I couldn't help myself. This dress was the quintessential party dress. Full of ruffles and fabric rosettes, I wanted to wear it, but I would settle for letting it inspire an awesome cake. We changed the rosettes to the beautiful eggplant color from the invitations, and of course, added a frosting Sadie as the topper. Knowing that the price of Sadie would be donated to the ASPCA solidified this decision for our dog-loving bride.

Flash forward to three months before the wedding. At a meeting with Shannon, she brings up a design change to the cake. Noooooo. I love her cake. No changes. Bad girl. Bad! (Sorry, getting a little into our theme here.) Turns out it was more of an addition to the cake than a change, and the story goes like this.

Shannon and Noah had been fostering a St. Bernard pup. By pup, I mean 140 pounds(he's still growing) of untrained, drooling, shedding, awesomeness. They found him a home, and placed him with a woman who adored him...for two weeks...until she discovered that she was horribly allergic to him, and it wasn't getting any better. Shannon and Noah took Winston back into their home until they could find another family for him. With a wedding coming up, two careers, and the fact that they were living, not in a house, but an apartment, they were hoping to find Winston a new family as soon as possible. It wasn't until the morning of Shannon's bridal shower that they got the call to bring Winston to his new home. Noah loaded him in the car as Shannon was getting ready for her shower, and all would be back to normal. They weren't gone for five minutes, when she heard Noah come back into the apartment. Assuming he forgot something, she came out of the bedroom, only to find him standing in the livingroom with Winston. And it was at that moment, that Noah became a dog-person. 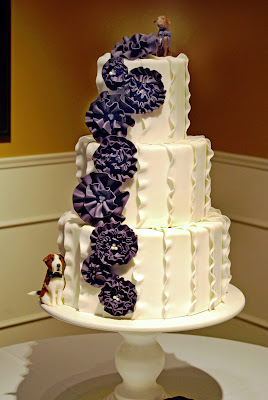 So, their family got a little bigger, and we had to add a frosting St. Bernard to the cake. Which, I most gladly did. 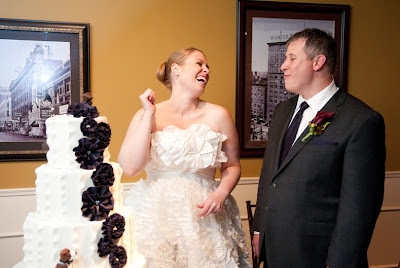 On a sidenote, I must divulge that faced with a wife who wanted a dog, our very own "Magic Phil" reluctantly agreed to adopt a rescued Corgi named Cela last year. Now, he'd be the first to admit that it isn't he who is the owner, but she owns him. He walks her twice a day, and even when he stops in the shop without her (usually she's tucked under his arm) he has a pocket full of treats. Proof again, that if given the chance, we're all dog-people. 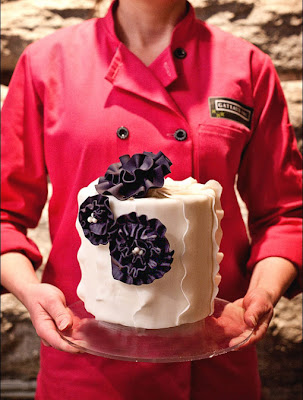 Many thanks to Camera Love Photography for these beautiful photos...and for cropping out the Evil Cake Genius's double chin. 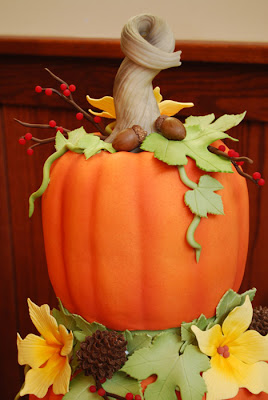 It was only a matter of time. No, not a matter of time before the Evil Cake Genius caved, and started making wedding cupcakes. A matter of time before she blogged a raving manifesto against this plague on the American wedding scene. I could wax on for pages about my disdain for these soul-less, uncouth desserts. How the thought of formally dressed guests peeling a soggy cupcake liner off of their dessert and eating it with their bare hands makes every etiquette bone in my body shudder. How a platter of cupcakes can't tell a story, set a tone, or wow your guests. Those are all my less-than-humble opinions. Opinions not shared by the majority of my peers, but my opinion nonetheless.
I'm not entirely against cupcakes in general. In the proper setting of a Girl Scout Jamboree, a 4 year old's birthday party, even a casual baby shower, they can have their charm. But for a wedding, call me inflexible, even call me no fun, there must be a cake.
"Cupcakes are cute." I hear that all the time. So are flip-flops, but you don't see brides....Oh my God, I must be getting old! Okay, maybe if you decide to wear flip-flops to your wedding, you should have cupcakes. There, the exception that proves the rule.

Now, what on earth does this rant have to do with or dear Sarah, and her awesome Pumpkin wedding cake? Patience kiddies, patience.

Sarah was one of those rare instances of "repeat business" in the wedding industry. This was her first wedding...but her mom was now officially a repeat client. Sarah's sister, Rebecca was wed in 2004(oddly, around the same time that the Northwestern University Women's LaCrosse team shocked and dismayed me by wearing flip-flops in a formal photo with the President during a White House visit, it's all coming together) and we made a most delightful May Day wedding cake for her. Cuter than any cupcake ever to come out of an oven, this four tier cake was bright and cheery, with whimsical tulips and daffodils, and a top tier shaped like a May Basket. It was adorable, contained delicious layers of filling...and eaten with the proper utensils. 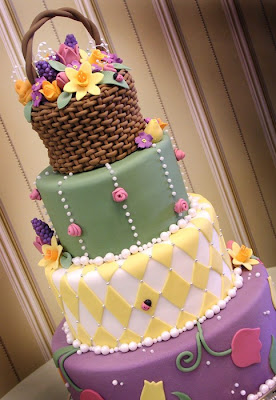 So, what would Sarah have in store for me? Typically, siblings are polar opposites when it comes to cakes. Her sister's cake was fun, a true introduction to the mood of the reception. Bright and cheery, it reflected the couple to a T. So, I was expecting a more formal, rigid, traditional style for Sarah's wedding. I couldn't have been more wrong. Turns out, the only opposite we had going for us was the time of year. Rebecca's wedding was on May 1st, Sarah's would be Mid-October, but both events would have the same feel. Beautiful venue, formal attire, but awesome party! Both sisters understood the fundamental of wedding planning, it's all about being a good host.

With that in mind, we planned a wedding cake that would, again, set the tone for the reception. A fall-themed materpiece of pumpkins, fondant leaves, chocolate acorns, frosting pinecones and pumpkin blossoms. The wedding would be held at a rustic lodge in Nisswa. The feel, fall harvest. The couple and the guests were from the Twin Cities, so this made the wedding a mini-destination wedding, forcing everyone to take a perfectly timed drive through the glorious Minnesota fall colors. To reflect the destnation aspect of the wedding, we made the bottom tier of cake shaped like a produce crate. Complete with frosting twine handles, and a shipping postmark with the wedding date, location, and return address of "Sorenson Farms". Their new homestead written in the sweetest language on earth. Frosting. 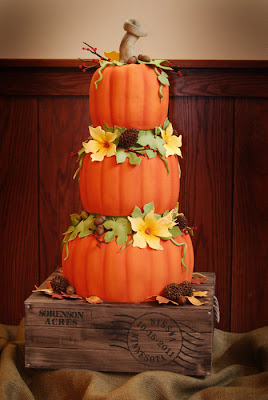 By the time we were done sketching, we all knew that this was our cake. It was a cake that told a story. A cake that told the guests that they were at the right location before they even laid eyes on the couple. That's when Sarah turned to her mother and said "..to think, we almost did cupcakes." Amen. 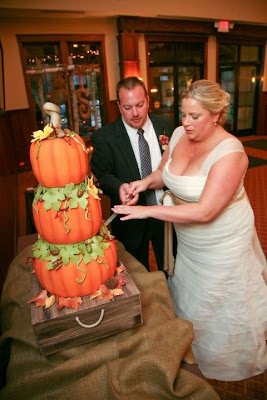 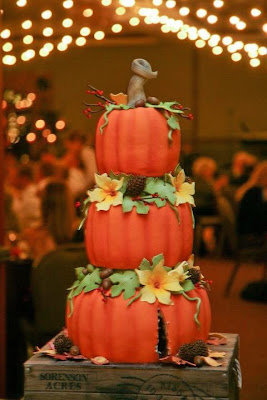 If clinging to certain formalities makes me old, I'm old. I'm a casual girl. For God's sake, I wear yoga pants to work, and meet with people in jeans and a chef coat. But some things need to retain their formality. When going to a wedding, I begrudgingly dress the part. Not out of vanity, but out of respect for the couple. If they can commit to a lifetime together, I can commit to wearing a pair of uncomfortable shoes and girl-clothes for an evening. And in exchange, all I ask is for a dessert that requires some thought, a little creativity, and a fork.