For anyone who still thinks that sweet 16 parties are about cinderella coaches and tiaras, snap out of it! Zoe's 16th birthday party was quite honestly the coolest birthday party I'd ever seen (yes, it even surpassed my husband's surprise 30th party at Chuck E Cheese's in Edina, and mind you, that was cool. No really, it was.)
Her design scheme was everything a sweet 16 party doesn't bring to mind. Black and red decor, with grafitti panels on the walls, a (virgin)Bloody Mary bar, Oxygen bar, dueling DJ's and Cirque de Soleil style aerialists performing from the ceiling. I kept losing Jenna during the set up. She was glazed over muttering "coool, oh, cooool" for long periods of time. 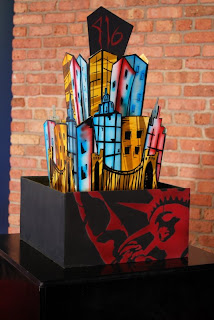 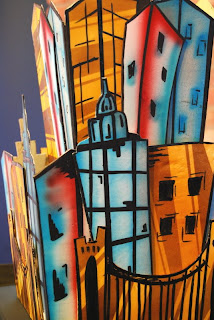 Now, we knew this was going to be an awesome party from the first time I met her planners. So the pressure was on for THE MOST AWESOME CAKE EVER. So, based on a photo of a particularly well-vandalized alley, we began our design. It was supposed to be a skyscraper shape covered with airbrushed grafitti, until we decided to airbrush "grafitti skyscrapers" on the sides of the cake to create a skyline. The coordinators thought the statue of liberty would be a good addition to the design, so we Googled our fair lady and came up with the look for the bottom tier. Apparently some enterprising tagger has designed a stencil of the statue to quickly tag buildings with her likeness all over New York. So, we made our own Stencil, and drew up the sketch of the cake without ever considering how we would pull the look off (that's pretty much how we do it over here at Gateaux, if I only designed cakes that I knew how to do, it would get pretty stagnant creatively, and what fun is decorating when there is no imminent feeling of terror and "what the hell was I thinking when I pitched this?" 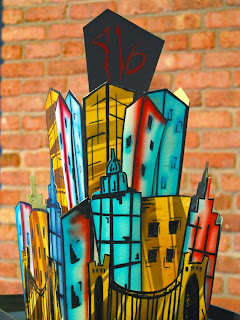 Luckily, the cake didn't only turn out exactly how I pictured it (rarely happens), but it was so fun to do that after airbrusing and painting the forty-odd frosting buildings for a day, I was disappointed that I didn't have more to make. I'll just have to hope for another girl as unique and cool as Zoe.

By the way...her reaction to the cake. My favorite cake comment ever... "That cake is SICK". For those of you as old and lame as me, that's a good thing.
Posted by Evil Cake Genius at 11:45 PM 3 comments: 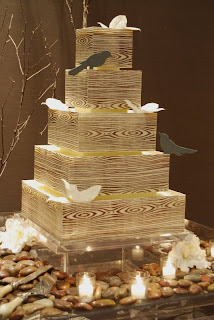 There are many adjectives that come to mind about Graves 601 Hotel in Minneapolis, Chic, Modern, Elegant, Sophisticated all come to mind. "Woodsy", not so much. So what do you do when you're an outdoorsy couple who embrace all the wonders of nature but you also want your wedding reception at one of the finest locations in the Twin cities? You hire Mimi designs, and book the Graves. I was astonished with the transformation of what I'd always considered the Ultra-Mod hotel for this event. The Mimi's (as we like to call them) created the perfect blend of natural design scheme with the modern understated elegance of the space. What resulted was the first "urban woodland" wedding I had ever seen...and it was stunning!

Onto the cake. In staying true to the woodland theme, the bride brought us a photo from Martha Stewart Magazine of a chocolate panelled cake that had been textured with a woodgraining tool in white chocolate. The bride decided to reverse the colors so that the cake would look more birch, and less like realistic wood to lend itself to the urban setting. As is common at the shop, we created every last chocolate panel using the tools and instructions from Miss Martha's magazine. Then, after they were complete, I went home, looked up alternatives on line, and decided to remake every one of them using a different tool, technique, and material (yes, I'm a joy to work for). The final result was an Ivory fondant, painted with woodgrain for a much more stylized and modern feel. Of course, I sent a photo of the two panel options to the Mimi's who hands down agreed with my choice (little did they know I had already completed the first round of panels, but they wouldn't be surprised at all, they know I'm neurotic).

Anyway, the final result...one of the most interesting and Graves 601-Worthy cake I've ever produced. The best part, the awesome catering crew at the Graves cut the panels into strips and garnished each slice with a pristine strip of wood-grained fondant. I just love it when the caterers carry through the look of the design in such a creative way. Kudos guys!
Posted by Evil Cake Genius at 10:44 PM 3 comments: