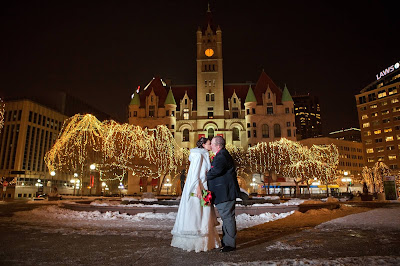 When you're a Jet,
You're a Jet all the way
From your first cigarette
To your last dyin' day.


All love stories are grand.  But The Evil Cake Genius particularly enjoys those grand, "you and me against the world" love against all odds, love stories.  You know, the Romeo and Juliet, the Maria and Tony, the "...a place for us" kind of forbidden love.  Aaaaah...that's the stuff.


Those of you who have no idea what I'm talking about, certainly haven't had the pleasure of enduring a Minnesota winter in their lifetime, so I'll give you a little back story.


In 1885, a New York reporter wrote that Saint Paul was, "another Siberia, unfit for human habitation" in winter. Offended by this attack on their city, the Saint Paul Chamber of Commerce decided to prove not only that Saint Paul was habitable but that its citizens were very much alive during winter, their most dominant season. Thus was born the Saint Paul Winter Carnival.  The Carnival wraps around the story of King Boreas, the King of the Winds, complete with his Royal court of guards, princes and princesses of the four directional winds, a brassy tart named Klondike Kate, and a whole host of other players that the Evil Cake Genius is pretty much unfamiliar with because she agrees with that New York reporter and has never actually attended the winter carnival (Sorry James).
Then there is the Vulcan Krewe.  An all male squad with the sole purpose of overthrowing King Boreas and taking control of the Carnival, therefore symbolically ending Winter.  Now, if these blokes could actually end winter in January in Minnesota, I'd marry one myself, but that is another story.

So, there you have them...the Royal Family and the Vulcan Krewe.  Sworn enemies...Hatfields and McCoys, Capulets and Montagues, Sharks and Jets.


Emily...Say it loud and there's music playing,
Say it soft and it's almost like praying.

Emily, I just met a girl named Emily
and suddenly that name
will never be the same to me!

So I began grilling James over this.  "There had to have been a rumble at the Carnival, then?  Did you have a knife fight with the Prince of the West Wind?  Did King Boreas forbid her to see you, then you were secretly married, and... "

Sadly, no.  I get no drama, no knife fights, no forbidden love...actually, their Winter Carnival friends think that it's pretty neat that a Vulcan and a Princess would fall in love and get married.  Many of the guests at the wedding would be former Royalty and Vulcan Krewe, and they all get along just swimmingly.

Despite my disgust, I agreed to meet with them to design a cake.

The idea of the cake was to incorporate the theme of Fire and Ice.  The couple would be married in December at the Landmark Center in St. Paul.  Right on Rice Park, a key site in the Winter Carnival festivities.  Their colors, crimson red, gold and white. 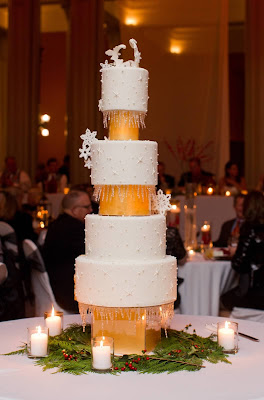 This was easy.  Well, not easy....the concept would be easy to design from.  The execution...probably not so much.  We decided to create a winter wonderland of a cake with flickering fire-glowing separators.  Fire...Ice...
but to keep the Vulcans from feeling slighted and possibly causing a riot, we added a bold hand-painted red and metallic gold piece climbing up from the bottom tiers.  A cake that is worthy of the House of Boreus and Vulcanus.  But still, there would be no rumble. Pooh. 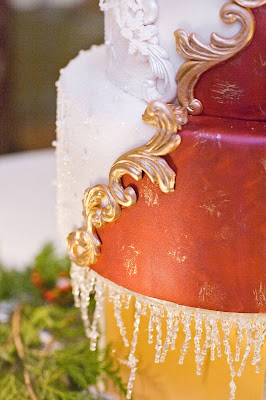 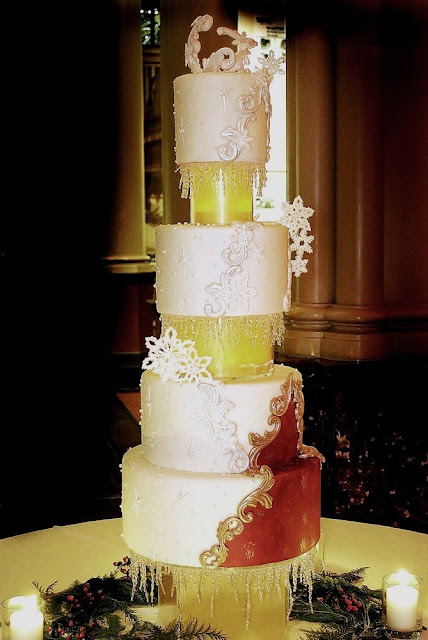 Of course, the combination of fire and ice would lead to icicles, so we hung them from the bottoms of the tiers.  And we topped it all with a swirling topper of West Wind fondant. 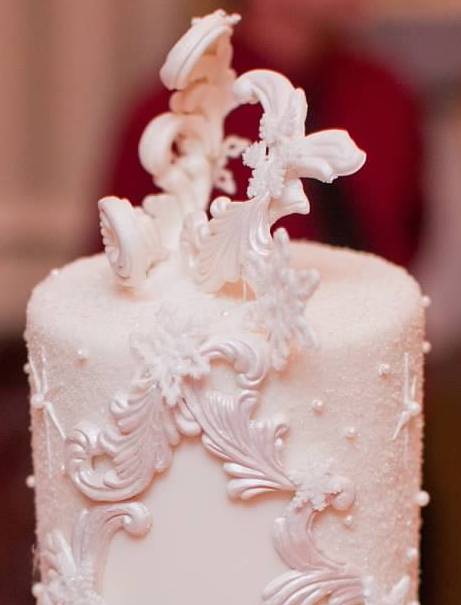 The wedding came and went and I heard no reports of a violent brawl in St. Paul that night.  Ho hum.
Emily and James were even kind enough to share some of their wedding photos with us.  And then I got it.  I got my moment of romance...of undying love....of, of.... 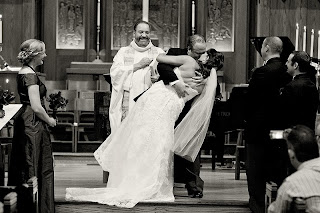 Make of our lives one life,
Day after day, one life.
Now it begins, now we start
One hand, one heart,
Even death won't part us now. 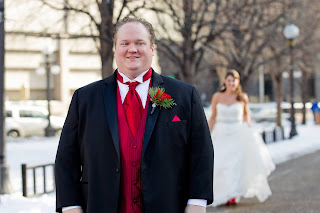 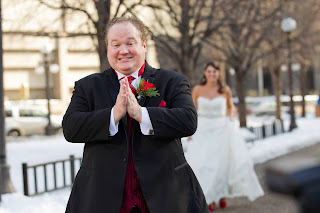 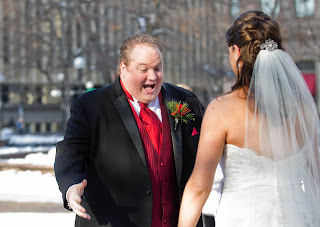 Just take one look at the pictures of Tony (sorry, James) seeing his Maria (sorry, Emily) for the first time and you'll realize that it doesn't take drama, gang rivalries, or even my favorite...knife fights...to make a grand romance.  It just takes two people who love the living bejeesus out of each other.  And a really good cake. 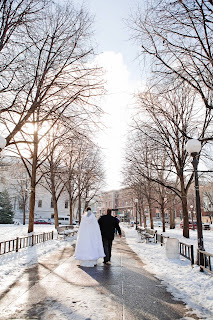 Thanks to Jodi Ann Photography for these beautiful photos!

James and Emily's cake had a lot of fun elements to create.

The snowflakes were all hand cut out of Mexican Paste (a combination of Fondant and Gum Paste) and coated with edible glitter so that they sparkled in the candlelight.  We use a number of different snowflake cutters, and then cut out the lacy patterns with all sorts of Micro-cutters to make each one unique.

The West Wind scrolls were hand molded in a chocolate filigree mold out of fondant, and then painted with Super Pearl.  The same filigree mold was used to make the Metallic gold scrolls surrounding the red painting on the bottom two tiers.  We hand-painted the red to give it a patina, rather than it be a solid red mass.

The separators are acrylic, lined with vellum, and we used battery operated "candles" inside the separators so that the light flickered like candlelight.

Loved your article on their wedding! Such a fabulous cake! Really can't put it into words how amazing it looked.