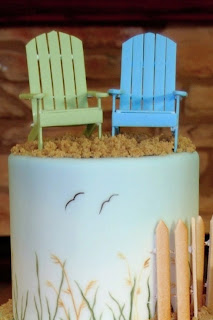 Nothing makes me happier than making a cake in the middle of a Minnesota winter that is NOT snow related. Don’t get me wrong, the snow is lovely, and winter weddings are cozy wonderful events. But…come mid-February…if I have to look at another frosting snowflake, while I’ve spent the last three months shoveling pounds of their real counterparts off of my sidewalk, and scraping their icy cousins off of my windshield every morning, I just about want to pack up everything and move south.

Enter Samantha and Anthony. A quick aside, here…Say their names together enough, and you can’t help but calling them Samanthony. That officially became their code name around the shop, after every time I had to reference the couple on camera, that’s how it came out. Watch the episode closely, I hesitate every time I say their names together. Anyway, back to the story. So, I get this call for a New Year’s Eve wedding reception, and I start hard-selling champagne theme, clock theme, confetti theme, anything but snowflakes. Then, they let me know that they were married on a beach in 2009 and they wanted the cake to help bring the beach to their families at their Minnesota reception. Amen, brothers and sisters! We have a beach-themed wedding cake in the middle of a land-locked state, in the middle of the winter! 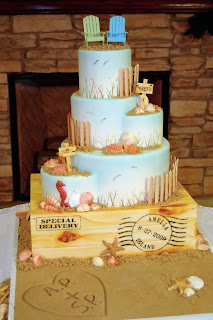 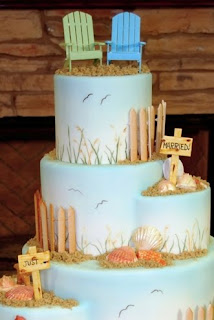 God, I love my job! Once I found out about Samanthony’s unusual marital situation, the fact that they had to have their wedding in a quick ceremony before he was deployed to Afghanistan, and that none of their family could make it to the actual wedding due to the quick timing, I was thrilled to be able to create a cake that would bring the beach to Minnesota. But how does one pack up a frosting beach for transport? Seems to me that a frosting crate would be the perfect solution. They agreed, and we quickly determined that the bottom tier would be a crate post marked with their wedding date and location, as well as some post marks of other places significant to them. My favorite was the “return to sender” stamp from Afghanistan, the bride loved it! 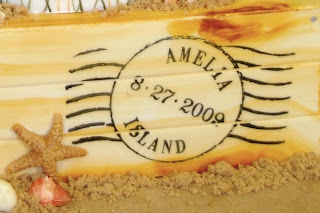 Now onto the baby! As it turns out, Samanthony were expecting their first baby…and knew what the gender of the child was. Samantha thought it would be fun to put a little sign on the cake that said “It’s a Boy” so that the guests would find out what the baby was when they looked at the cake. I had heard of baby shower cakes being dyed either pink or blue so that when the cake was cut, it revealed the baby’s gender. I suggested it immediately, and they loved the idea.

I began testing various shades blue cakes. Too pale, and none of the guests would be able to tell the color when the cake was cut from across the room, too dark, and no one would want to eat it. We settled on a pretty vibrant, unmistakable color. But what they don’t show you on the Amazing Wedding Cakes episode, is that in an email with Anthony’s sister (who was helping to plan the reception) I blew the surprise. I was careful to reference “pink or blue” cake when discussing the cake flavor in three different areas of the email. In the fourth reference…I blew it. I typed "blue" rather than the “pink or blue” bluff. Just be glad I'm a cake lady, not CIA, I'd fold like a cheap lawn chair under pressure! Lucky for me, the couple was incredibly gracious about it, and more importantly, Anthony’s sister can keep secrets better than the cake lady! 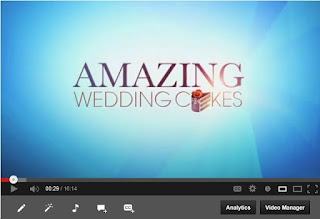 Want to see more about this Amazing Cake?  Check out some excerpts of the Gateaux Girls making it on Amazing Wedding Cakes!  Click Here to Watch

What a beautiful cake! The wood look on the crate is awesome! It's by far the best faux wood I've seen.

I saw you do the stamps on tv, and am trying to figure out how you did that and what that big thing was you laid on the cake to rub the design through. Please share.

I saw you make this on TV and was so excited! I've been following your blog for a long time and was very happy to see you getting the recognition you deserve. This cake, as all of your work, is brilliant! Much luck to you. I look forward to seeing you more in action!

Thanks Lisa,
I know you've been one of our blog followers for quite some time. I recognized your name immediately. Thank you for continuing to follow the cake-insanity! We've got another 6 episodes already filmed, so there's plenty more to watch.

I LOVE LOVE LOVE this cake! I saw it on "Amazing Wedding Cakes" and I cried when they cut the cake to reveal the sex of the baby. The cake is absolutely beautiful, and I love how you made the crate and the chairs.

Where did you get the plans for the adirondack chairs at? I need to make one for a birthday cake. :)

We just searched adirondack chair plans on the internet and found pictures. Then we sized them with our printer!

I watch every Sunday, and have for years! This is the first season I have seen your company, and this is the BEST CAKE I HAVE EVER SEEN!!!! Its beautiful and truly creative and professional. I can wait to see whatever you do next, you guys are great !!! :)

i finally watched this episode yesterday (on DVR) and this is hands down my favorite cake ever!! when i grow up, i wanna be just like you....although i'm pretty sure i'm older than you :) great job!!