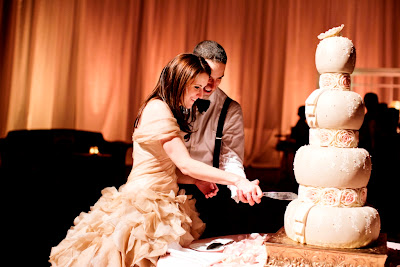 Making wedding cakes is a tough business.  Aside from the long hours, Carpal Tunnel-ridden hands, Dish-Pan-hands, constant temptation to EAT EVERYTHING around you, and Chronic bouts of  Catastrophic Cake-tastrophy nightmares keeping you from getting a good night's sleep from late April until November, and mopping...all that mopping, it is a tricky business model to boot.  You see, we love our clients.  Our clients love us.  We have a fabulous working relationship and build customer loyalty that any Fortune 500 Company would kill for.  Then, they get married, we make them an awesome cake, aaaaaand, we're done.

A lot of bakeries would see their clients again for birthday cakes, and baby shower cakes, etc. after the wedding, but we're a small bakery that does big cakes.  So we can only take three cakes per weekend.  So, unless you plan to have a small gathering of 100 or so guests every year at your birthday party, we're probably not going to be doing the cake.

When I started Gateaux, 17 years ago, I was aware of this little business glitch.  And, while I wasn't rooting for the divorce rates to skyrocket to bring me back some of my favorite couples (I guess they'd be singles) as repeat clients, it did worry me a bit.

After the first couple of years in business, I learned that I was (don't tell my husband this) pleasantly wrong.  While I didn't have repeat clients in the traditional sense, I did have repeat clients in an even better way.  I discovered that if you do your job well and have fun with your clients in the process, they often drag their siblings, friends, even coworkers back to you as soon as they hear of another engagement.  Repeat.  Business.

Some of you may remember Marissa and Robb and their Tale of Three Cities Cake from 2011.  Turns out that Robb has a sister who planned to marry in 2012.  I was thrilled when Jacey's wedding planners Amy Zaroff Events contacted me to let me know that Jacey wanted to use us for her wedding cake as well.  Thrilled, and a little worried.  You see, when you're wired for anxiety the way the Evil Cake Genius is, you can turn a flattering situation into a scary one really quickly.  The problem...not sibling rivalry...in fact, Jacey and her brother and his new wife couldn't be further from the notion of it.  But, Cake Rivalry...that is a very real thing.

I loved Marissa and Robb's cake.  It is easily one of my top five in the past few years.  So, all I could think about was how I was running the risk of disappointing Robb's sister.  And while I'm at it, how about their entire side of the guest list, who saw her brother's awesome cake only a year earlier.  Let's face it, I set the bar pretty high with that cake.

To compliment things more, when Jacey came in for her design session, her parents came along.   Her dad  mentioned that he would be contacting me for an 80th birthday cake for his mother.  The party would be at his house mid summer.  I thought nothing of it, and continued working with Jacey and her crew to design a wedding cake that unbeknownst to them, had to meet a specific level of awesomeness in the Cake Lady's warped mind.  And thanks to a great design session...a bride with impeccable taste, good coordinators, and a Mother of the Bride who has incredible style (it was her suggestion that we make spherical tiers) we succeeded.  The silhouette was exquisite, we added fondant "fabric rosettes" with an ombre effect to the separators, and even tied in the Sheet Music from the song that the Groom would perform at the ceremony.  Beautiful, elegant, meaningful, and most important (to me), just as awesome as the cake we made for her brother! And all was right in the Evil Cake Geniuses twisted head.

Two weeks later, I had my meeting with the father of the Bride, Scott about his mother's 80th birthday party.  I figured, something simple, a nice little gathering, maybe a lovely cake with some pretty flowers on it.  But Scott had an idea.  I good idea.  An idea that he had no idea would send me right back down that Cake Rivalry road.

His mother loves Ice Cream.  As a matter of fact, his parents owned a string of Ice Cream Parlor restaurants in the Twin Cities for a number of years.  So Scott thought it fitting to make his mother's cake look like a giant Ice Cream Sundae.  I'm in!  I love the idea!  I need to make this incredible...people are expecting great things, I can do this, I can outdo them all, I can make the cake of the century...I have to make the cake of the century, I can't let Jacey and Robb's Grandma down, she's seen Robb's cake, she's seen Jacey's sketches, I...must...make....the best cake ever created...win, win, win!! Weee are the championnns my friennnd....and weeee'llll keeee

So Scott and I sketched a cake that I honestly had no idea how to make.  But I had a couple of months, so I'd figure it out.  When he left, he returned about a half hour later with one of the old Ice Cream Sundae photos that hung on the wall of their restaurants...and, brace yourself for sweetness...a photo of his mom so I could see the wonderful woman who would be receiving this cake. 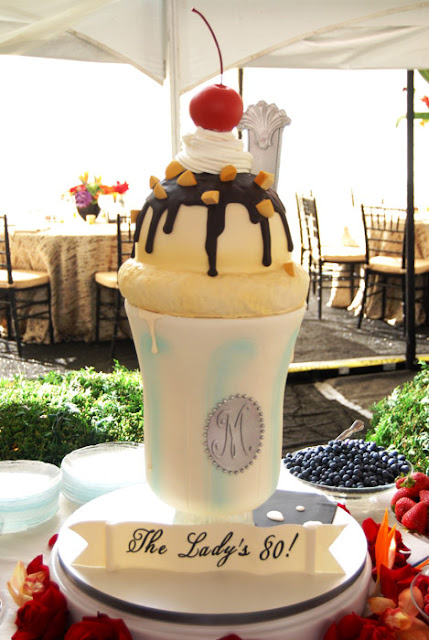 Fortunately, many of you know that I have a retired Engineer on my side.  My father in law, Magic Phil, really earned his moniker on this one.  He built me support structure that allowed me to create that perfect Sundae glass shape.  We delivered the cake to the party (exquisitely executed party, might I add) and began our obsession with whether or not Jacey's wedding cake could stand up to such an awesome birthday cake.  It's a truly vicious cycle, the workings of an Evil Cake Genius' brain. 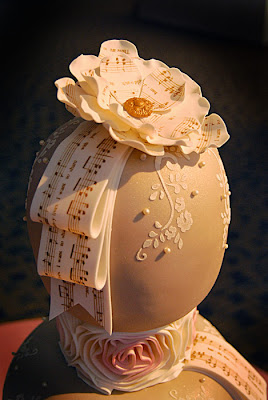 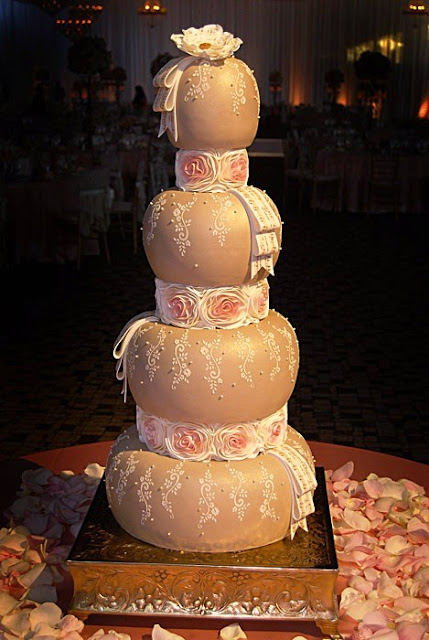 And it did.  Jacey's cake was beautiful.  It lived up to its two predecessors without a doubt.   It has joined the ranks of my favorite all-time cakes.  Which is good, because these guys are one of my all time favorite families.  Until, of course....they order another cake, and I descend right back into cake...madness.

The fondant of Jacey's cake matched the color of her incredible Vera Wang gown.  It was created by mixing Gold Sparkle Luster dust with Nu Silver Luster dust.  A color, we (for sheer lack of creativity) call "Gilver".
The rounded "topiary" shape of the cake tiers were hand carved.  To the best of my knowledge, there isn't a cake pan that makes this unique shape. 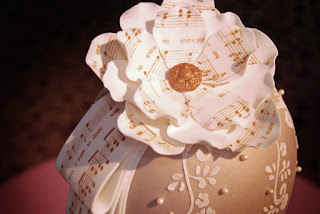 The detailing on the tiers were custom cut stencils, and the sheet music pattern was a custom mesh stencil that we created based off of the actual sheet music from the song that the Groom (Aaron) sang to her during the ceremony (what an awesome guy!)

We've added the sheet music stencil to our Evil Cake Genius Site so other decorators can create this intricate look with Evil Speed too.  Click HERE to see.
The flower topper on this cake was done using the Sheet Music Stencil and our Vintage Vow Flower Tutorial
We were thrilled to find their beautiful antique gold cake stand at Home Decorator's Accessories They have some great stands!

very interesting post.this is my first time visit here.i found so mmany interesting stuff in your blog especially its discussion..thanks for the post! cinderella cakes anaheim