Erin's Wedding, and the two Kays 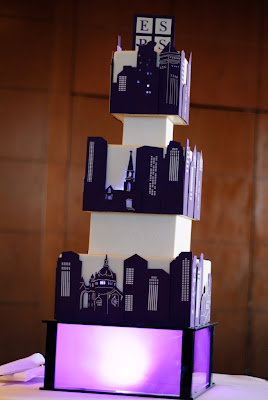 I did a 60th birthday cake for a brilliant woman (Hi Maria) a couple of years ago. She is a professor at Mankato, and was leaving for Africa right after the party to finish her latest paper. The subject, I'm sure I will over-simplify...but it intrigued me to the core...the dual personalities of women. Not that freaky Cybil-type stuff, but something that every woman is familiar with in her daily life, just maybe she's not aware of it. Maria is studying how women change their outward persona depending on the situational demands they face during any given day. Business woman, vs. Mother, vs. Wife...all incredibly different. She simplified it for me by pointing out that to listen to me on a phone call with a client is very different from hearing me talk to one of my friends. Women tend to take on different behavior, speech patterns, etc. depending on the situation.

Fast forward to six months ago. I find an appointment on the books for a bride named Erin..(with Jenna's Mom, Kay). Those of you who have worked with us know Jenna. She is my right-hand woman...the organized, hard worker who actually gets work done despite my constant distractions.

Erin is Kay's best friend. I've met Kay several times. She is the consummate Mom. I call her Mrs. Weasley because of her fabulous red-hair, and penchant for worrying about her six kids (she sends out mass texts when severe weather enters the area). Not sometimes....ALWAYS.

I met with Erin and Kay, and Erin's son Alex, on a Monday. Jenna's day off. I was ready for a nice little chat and some cake sketching with Mrs. Weasley. What I got, however, was a sociological experience, that my college-professor client Maria would be proud of. You see, Mrs. Weasley, when with her friends, is a riot. I've never laughed so hard at a cake appointment in my life. Those two women had me laughing, blushing, practically crying. Poor Alex, just rolled his eyes from time to time, as though this were par for the course when these two joined forces.

By the time they left, we had three completely different cake sketches, and an appointment for them to come back to discuss invitations. Not necessarily because I had some amazing ideas for her invitations, but more like I just wanted to hang out with them again.

By the time they returned for the invitation meeting, now with Erin's sister in tow (more fuel for the revelry) Erin had decided to do the skyline cake that we designed. Her reception would be at the top of the IDS building, so we decided that we could use the view as our inspiration. We decided to carry that theme over to the invitations, adding a silhouette of the church where the reception was to be held to the Minneapolis skyline. Any other significant landmarks? Alex had an answer for that. Turns out they were holding out on me. Erin's family owns the Rollergardens. Yep, you know it, the St. Louis Park Landmark Roller Rink, with...a giant dinosaur on its roof! Well, turns out they had to move the dino inside, after years of it being stolen as a SLP High Homecoming prank, but nonetheless, DINOSAUR. 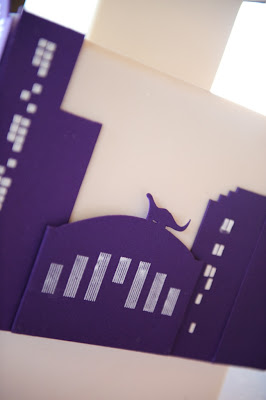 I set Alex out to do some recon. He is an incredibly talented photographer. He got me photos of the church, the Rollergardens, and yes, the Dinosaur. We got the photos to my husband/graphic design consultant, the Goo, who created a landscape logo for the invitations. The Rollergarden silhouette featured on the RSVP card, where the options to attend were either "All skate" or "Wipeout". 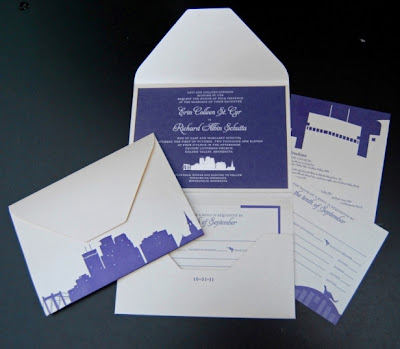 Best thing about the invitations, was finding one in my mailbox. My husband and I decided to "All Skate" and had a fabulous time. We got to enjoy seeing the guests react to our light-up skyline cake, and even had a slice ourselves. 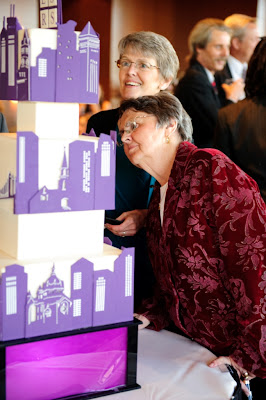 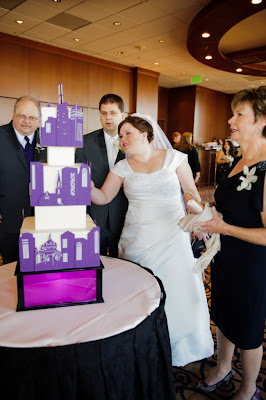 Alex took a skyline photo of Minneapolis, that they enlarged to poster size, cut into place card size pieces, and put back together on a large board. Coolest place card I've ever seen. The Goo and I got to sit at a table with Jenna and the other Weasley kids, and I got to see Jenna's mom play the role of Jenna's mom again. With a few moments of Erin's friend peppered in for good measure. Both are lovely women.
Posted by Evil Cake Genius at 5:22 PM