Lindsay, Sean, and the Durability of Rice Crispy Treats 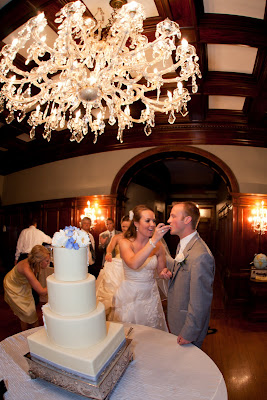 When I met with Lindsay and Sean, I was instantly intrigued by the fact that they are both commercial airline pilots. Of course, all sorts of travel-inspired cakes came into my head. After all, cake and traveling are two of my favorite things in life. However, as details of their wedding plans came out, the chance of working in some crazy whimsey travel themed cake slipped away.

Their reception would be at the Semple Mansion in Minneapolis, one of my favorite venues, but also incredibly traditional in decor. Their palette would be Ivory,Pale Yellow and Silver, with accents of French Blue in the floral, also subdued and classic. But the nail in the "Crazy Cake" coffin, was that Lindsay had chosen to wear the most beautiful Priscilla of Boston gown that had incredible ribbon embroidery accents. 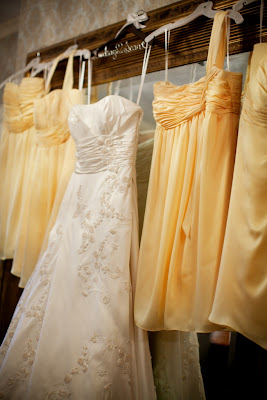 Honestly, it was a cake waiting to happen. That, coupled with their Fleur de Lis motif popping up throughout the stationery, decor, and even attire, made the cake practically design itself. We all loved the design, and I quickly forgot about my visions of travel-cake grandeur.

That is, until I got a call from Ashleigh. Ashleigh is one of my favorite former brides, and actually the person who referred Lindsay and Sean to us in the first place. Ashleigh was planning a bridal shower for Lindsay...with...a travel theme! Hell to the yeah, the cake lady gets to make the elegant wedding cake, and the theme cake too!

Now, Ashleigh's timing was impeccable, as we were about to film three more episodes of "Amazing Wedding Cakes" for WeTV. The producers were looking for cakes that were unusual, interesting, and most importantly, cakes that would put me in a position in which I was likely to have a full-on mental meltdown on television. I can oblige. Instead of the original thought of a stack of vintage suitcases, I pitched to Ashleigh a vintage travel trunk cake with a full-size globe on top of it. Why do I do these things? I don't know. The producers, Ashleigh, Lindsay, all would have been thrilled with a stack of vintage suitcase cakes. But instead, I had to go and pitch a sphere. Have we ever done a sphere before? No. Why not do it with a kitchen full of camera men (hello Amazing Larry and Kimmel) to record my descent into complete madness. 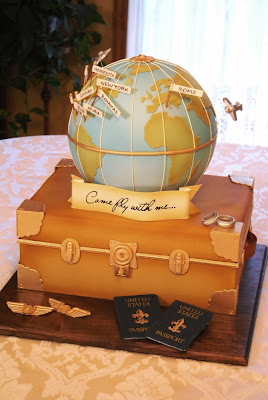 For details on how that worked out for us, just watch the episode, but let's get back to our couple. We made the globe out of Rice Crispie Treats, then frosted it in fondant. We delivered the cake to the shower, they ate the cake, loved it, but didn't cut into the globe. As it happens, they decided to save the globe to display it on their candy table at the wedding reception...6 months later. God Speed little Crispie...and I'm staying completely out of this.

The wedding came, and we delivered the beautiful wedding cake. 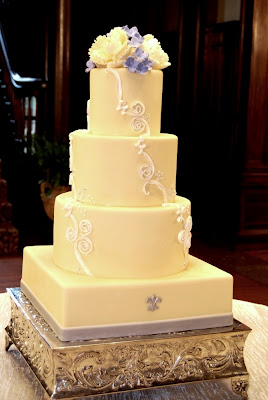 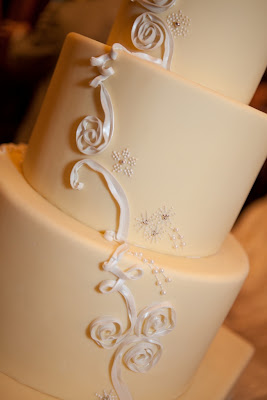 When we arrived, there it was, the Rice Crispie globe, in all its glory, mounted on top of a cute little suitcase that they'd bought as a display stand for it. 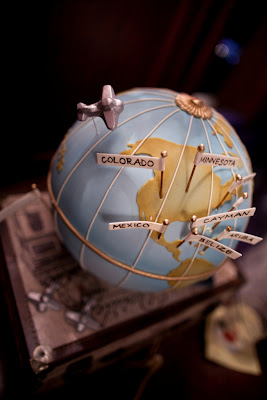 I've got to admit, I was shocked at how well preserved it was. We've kept dummy cakes for over a year at the shop, but those are styrofoam underneath. I had no idea that rice crispies could last that long without imploding, exploding, or otherwise ploding. Makes you want to treat the crispies with a little more respect, doesn't it?
Thanks to Brandis Alves Photography for the photographic evidence of this mad science experiment...and the beautiful couple.
Posted by Evil Cake Genius at 6:20 PM

I LOVED watching the episode where you made the globe!!! Their wedding cake was just stunning! Awesome job!!! :)