Those of you who have been following the cake log for a while, know that we are no strangers to requests for Taj Mahal Cakes. What better physical representation of a man's love for his wife is there? So, we've tinkered with this in or years of decorating. The first was a Taj Mahal Edible Cake Topper for Lynn and Himanshu, the rest of the cake was decked out with gold patterns from the Bride's and Bridesmaid's Saris. A couple of years later, we made our "Taj Mahal Deja Vu" cake as a step closer to that ever-requested scale model replica.

Well, finally, Yesmin walked into the shop, and would accept no excuses. She and her fiance wanted a cake shaped like that beautiful monument. So we took our favorite elements from the previous Taj-inspired cakes, and took to some "Cakeitechture". 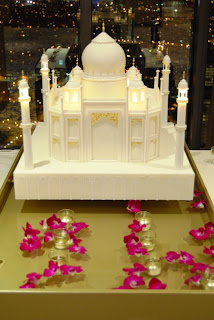 Of course, Magic Phil hooked us up with some incredible little lights that he rigged on posts for us to light up the minarets, that just goes without saying. But he also built us a water-tight stand so that we could build our own reflecting pool in front of the cake.

One thing I've never seen in my 15 years of doing this...the bride had stanchions set up around the cake after it was set up. We've joked about doing this for years, you never know who's going to give into temptation and test out the cake's authenticity before it is cut. Yesmin wasn't about to find out!

Robin,
I sure did not want to find out any body wanting to see if it was real or not!!!. My husband's reaction was priceless.....!!! Thank you for the amazing cake!!!

It's an amazing cake!!

AMAZING!!!! How much would this exact cake cost? We are holding a large event and this would DEF be the WOOOOW factor were looking for!

Thank you! Please go to www.gateaux-inc.com and send us a contact form to get more information about this cake.