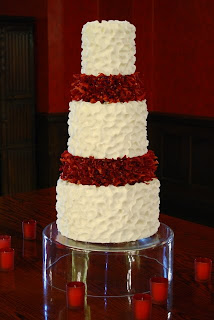 Amy and Miles wanted an absolutely minimalist cake design. They really wanted the cake to feel sculptural, with some room between the tiers for their florists to pack in solid red flowers. Therefore, the cake needed to be clean, elegant, and non-fussy. What they really wanted, was a completely plain cake, which, we could have accommodated, but then...

It turns out that their inspiration for "sculptural" was based on the fact that they were planning on being married in Miles' grandmothers garden. Once we started talking, I learned that this is not your typical "granny's flower patch". He pulled up some pictures on his phone, and I realized that this woman had some serious style! Her garden was filled with beautiful, modern sculptures.

Once my enthusiasm for the art was made apparent by my squeals of delight, they realized that there were far more possibilities in wedding cake design than they had formerly realized. They pulled up several scuptures for inspiration, and we sketched up several cakes.

It wasn't until they had a photographer capture this photo of one of the sculptures, that we really understood what the cake should look like. 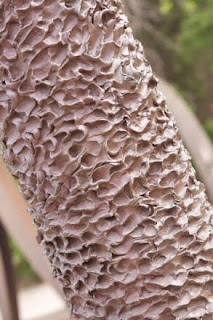 I have to admit, it was really hard for a cake lady who is obsessed with perfectly smooth fondant, to deliberately deface a perfectly porcelaine-like fondant cake. But once I got over the initial discomfort, we really go into it. And once we set the cake up with the beautiful red orchid separators that Bastian*Skoog assembled for us, we absolutely fell in cake-love with it!

Fortunately, the couple felt the same. Amy even mentioned that Miles' family caught the reference to the sculpture instantly! She even sent me a couple of cake cutting photos (check out her niece on the right side of the photo, in a state we like to call "Sugar-nirvana". The cake is truly a sculpture - beautiful and so stunning!