Lions, Shepherds and 70 years of marriage 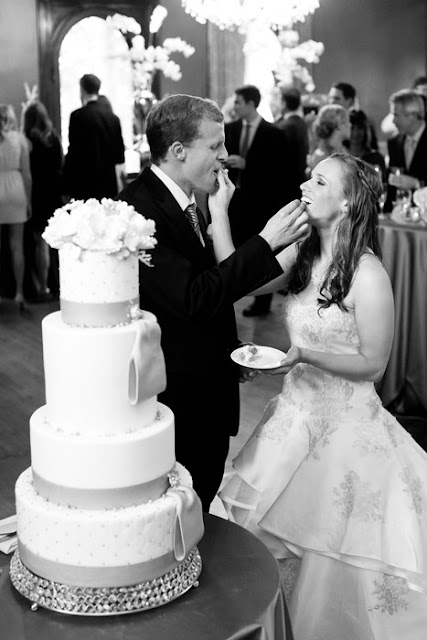 Some of you have read our Blog Post entitled "Style" last year.  This one was certain to be titled "Grace" but I couldn't pass up the Lion and Shepherd thing.  Sounds like the opening to a dirty joke "So this lion walks into a bar..." so I had to use it.

Webster defines Grace in many ways, and shy of the "saying Grace before dinner" definition, Jessica and Peter were a shining example of two people who (whether it be by nature or nurture) embodied this beautiful concept.

Grace : the quality or state of being considerate or thoughtful
It started with the groom's cake.  The couple was having a champagne bar at the wedding (something for their guests to indulge in during the cocktail hour) so there was an underlying theme of champagne to the event.  When Peter saw a champagne themed cake that we had done for a 40th birthday, he knew that would make the perfect groom's cake.  Typically, I'd do the champagne bottles with important dates in the groom's life.  But rather than have it be all about him, the couple decided it would be a great place to honor their parents. 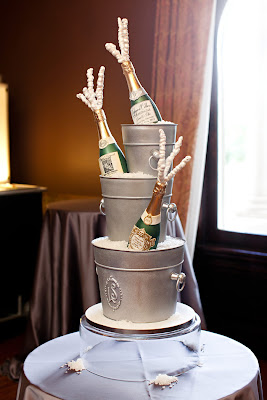 Jessica and Peter went on to explain that between their parents, there was over 70 years of marriage.  Who does that kind of math?  Who thinks to give that kind of credit? Hmmm....Grace.
Now came the fun.  We would come up with custom labels for the chocolate champagne bottles.  His parent's with a Shepherd (his last name being Shepard) and her parents with a Lion (last name Lyon)  We would make the vintage the year of their weddings, and have the top bottle represent the new Mr. and Mrs. Shepard (an inaugural vintage). 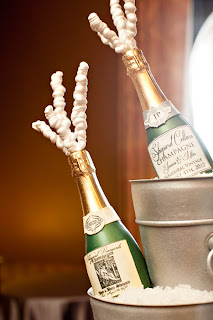 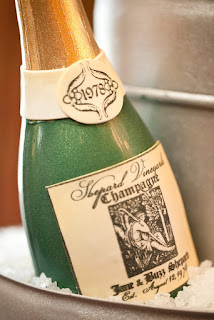 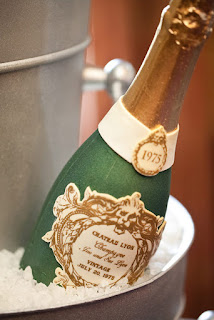 That being done, let's move onto another of Webster's definitions of Grace
Grace: ease and suppleness of movement or bearing
This one was allllll Jessica.  When we designed the wedding cake, we couldn't help but pull a bit of detail from her wedding dress.  I drew two options, one that really imitated the gown, and one that just included the beautiful silver lace applique on her bodice.  She had the good sense to choose the former.  We incorporated the monogram from their invitations, the silver ribbon chair ties, and of all things, these little beaded-bobble napkin rings that added this perfect touch of effervescence (like champagne bubbles, but not champagne bubbles) to the table settings.  That whole design scheme, rather than "theme" thing that I love to encourage. 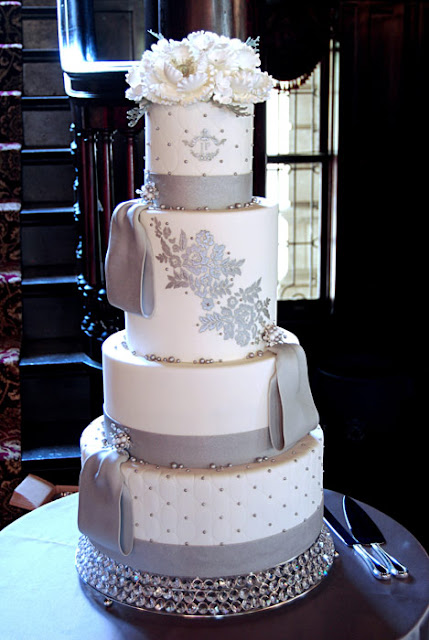 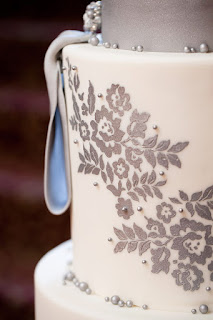 For the dress detail, Jessica's planner (the awesome Sarah Trotter of Lasting Impressions) provided me with a photo of her dress (shown on a model).  It was a beautiful dress... Very chic, very unusual. But when we returned to the reception on the wedding night and saw Jessica in the dress, it had transformed.  She didn't walk in that dress, she levitated.  I don't know what it was...probably the G-word, but to see Jessica in that dress made the shot from the magazine look flat and lifeless.
I have brides tell me all the time when I see the magazine photo of the dress "I don't look as good as the model in it".   But to see my bride's in their gowns, it always amazes me how no model can capture what it is to be a bride.  They glow, they beam, they are the embodiment of, you got it...Grace. 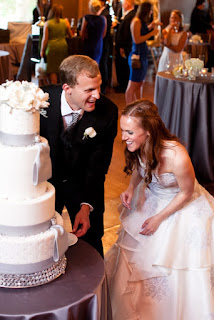 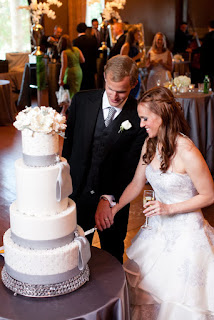 Grace :disposition to or an act or instance of kindness, courtesy, or clemency; i.e.a gracious host
I do a lot of weddings. I have a lot of great clients. The best clients are always those who understand that a wedding is a chance to be a gracious host to your guests. The couples who plan their wedding as though they are planning an albeit brief, vacation for their friends and family. They use it as a chance to entertain.
Jessica and Peter got this.
So when I suggested that we try out a new concept that we had been wanting to try as a combination late-night-snack, reception entertainment, favour.  They were the first couple to take the risk, and try it out.  We decided to do a gourmet popcorn table during the dance.  Everything from Habenero and S'mores (with mini graham crackers and marshmallows, baby!!!) to White Cheddar and Peanut Butter Cup, you name it, it was deliciously there.  And, displayed in champagne buckets!

When we came back to set up the table during dinner, several guests came down to the bathroom and saw the table in process.  The overwhelming reaction was "they did this for me".  One after another, they all came out with that same idea...that the bride and groom must have known that they loved popcorn, and created the table in their honor.  It was hilarious.  My personal favorite was an uncle who could only say "Good Gravy" when he saw it.  Best. Phrase. Ever. 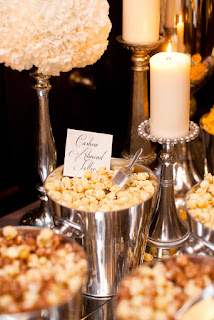 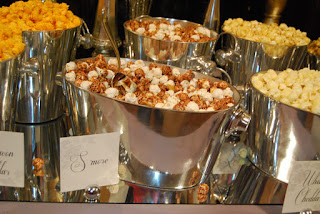 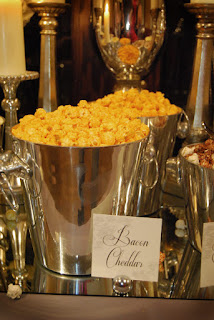 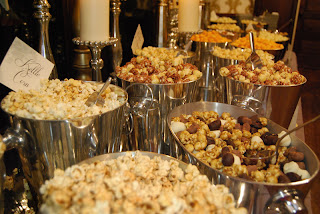 Grace: Mercy, Pardon : a temporary exemption : reprieve
Like I mentioned earlier, we had a rare opportunity to come back to this reception to set up the popcorn table.  It was an incredibly busy wedding day for us.  And to get all of our wedding cakes and dessert tables, etc. delivered and rendez vous back at this reception to set up the popcorn was a relief.  That is, until we walked in the door of the now empty reception area (dinner was served on the third floor) to the waving arms of the bartender.  Who showed us....in slow motion (or at least that's how it happened in my mind) that one of the chocolate champagne bottles had taken a nose dive off the side of the cake...during the cocktail hour.  Let's just say.  I've been decorating cakes for 17 years, and never have I seen anything like this happen to one of our cakes.  People always ask "have you ever dropped a cake?"  The answer is no (knock on wood).  But the way I felt when he showed me the blank space where the bottle was supposed to be, I can't imagine I could possibly feel worse if I had dropped the thing.  I hope to never find out.  I looked over at Jenna, who looked like someone had just punched her in the gut.  The two of us were stunned, and devastated.  This isn't melodrama (see the Decorator's notes below) this is that unmistakable feeling that you get when something went horribly wrong and you are powerless.  Can't undo it...stuck.
We did the only thing we could do, set up the popcorn and tried to work out what we had done wrong.  Did we position the dowels under the bottles wrong?  Was the Coconut Creme cake flavor too light to hold the weight?  Did we angle the bottles too sharply?  While working in silence, the Bride and Groom appeared.  They had come downstairs for a moment during dinner and saw us.  I wanted to run.  I wanted to hide.  I wanted to..."Robin!!!"  Too late....they saw me.  I turned to begin profusely apologising, but before I could open my mouth, they were raving about how lovely both cakes were and how much people loved them....how much they loved them.  I mentioned the champagne bottle that had lept to its death during cocktails, to which they replied "I'm sure one of the guests messed with it" and "Our parents had already seen it, we already had photos taken with it" and other reassuring sentiments.   And all the Who's down in Whoville sang...and this Evil Cake Genius saw what she knew was there all along...Grace.

Many thanks to the Fabulous Betsy Wall Photography for these beautiful photos!

We realize that many of our readers are fellow cake decorators, so we've started a new section of our blog for all of you.  This section will be used to share tips on certain designs, sources for products used in the posts, and other insights that only us Cakey Types would truly appreciate.

Jessica and Peter's wedding cake was a joy to decorate.  We used lots of techniques that were new to us, and loved the results.  The lace was one of our custom lace stencils.  We copied the actual lace from Jessica's beautiful gown to create a stencil, stenciled it in grey royal icing, then air brushed it silver before removing the stencil.  You can order her stencil in our Evil Cake Genius store HERE

Found this at a local floral supply place.  Actually, didn't find it...I walked in and one of the employees there said "Robin!! We've been waiting to show you this"...and it was mine.  Fortunately for you other decorators out there, it is now available on this web site http://www.save-on-crafts.com/crystalcake.html in square, and is soooooo much cheaper than I paid for mine.  PS, if anyone at this site would like to thank me for the referrals, I'll gladly take one of everything on your site.  Love, love, love it!!!  Gimme, gimme.

This baby still haunts me.  We actually did a birthday cake with the exact same layout and chocolate bottles about 6 months before this wedding, with no trouble at all... I always say that delivering each cake is like putting your kid on the school bus (to which my husband once pointed out "yeah, if the teacher cut them up and ate them".  Anyway, it's always tempting to not share stories of failure, but I've always been one to fully disclose.  I hope my sharing my trauma will help the next decorator to know that those bottles are heavy, and apparently doweling them might not suffice if they are angled too sharply.  The labels on the Champagne bottles were Screen Printed in royal icing onto fondant.  I haven't released these for sale yet, but we have just added several screens and a full screen printing tutorial to our Evil Cake Genius site We are adding more and more of them as people get familiar with the process and realize how awesome they are to use (not so fun to make, but awesome to use, that's why we're making them for you!)

What a fabulous cake...with an equally 'grace'-filled sentiment behind it! Love popcorn bar in champagne buckets, no less. :-)

It's wonderful that you include your decorator's notes for wannabees like me. Thank you SO much.