Half the fun is getting back.

Truth be told, you probably own a refrigerated SUV or car, you just didn't know it.

We get asked all the time about how we deliver these little beauties, and the answer always surprises people.  First, we do not deliver wedding cakes fully stacked.  More power to those who have the cahones to do so, but that is simply not in my risk-reward mental make up.  Second, while we don't have a refrigerated truck, it is a little known fact that if you relentlessly crank the Air Conditioning in a relatively new SUV at high speed and the lowest temperature setting, while recirculating the air through the vehicle, it can get damn near refrigerated!  This is most noticeable when the driver (and often her poor assistant) deliver a cake several hours away.

We begin by packing the cake tiers in their sealed corrugated cardboard boxes securely in the back of the vehicle, then we suit up.  Not unlike an arctic expedition, cake delivery can require multiple layers of clothes and high calorie foods to keep you going.  My typical accoutrements are as follows:
And we're off.

So, I get this email from Jason.  He's not a groom, not a wedding planner, he is, however, the world's most awesome brother.  Why, you ask?  I'm sure there are plenty of other reasons, but what pushed him into the number one slot is that he contacted me because he wanted to buy his sister Shaina and her fiance Zac an awesome wedding cake.  I've  been doing this for 17 years and never had a sibling pick up the tab on a cake.  Best. Brother. Ever.  When I asked Jason why, he said "seemed like the thing to do".
Shaina and Zac came in for the design session without Jason (he lives on the East Coast) so possible motive number one...controlling the cake design for your own cake-design glory at the reception...not it. They also picked up samples without Jason...(again, he lives on the East Coast)  so, possible motive number two...securing an invitation to the cake tasting...also not it.  We'll solve this mystery before the blog is through.

We designed a fabulously modern, graphic and beautiful cake for Shaina and Zac.  Their color scheme of apple green, sky blue, and royal blue is nothing I ever would have come up with myself, but it pops! 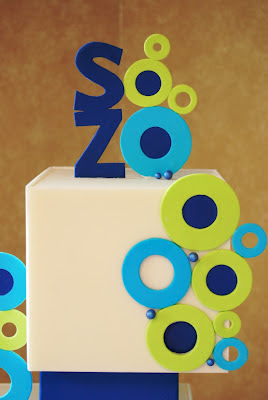 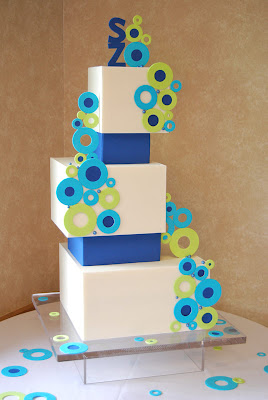 The cake would be delivered to Two Harbors, Minnesota, a healthy 3 1/4 hour drive from the shop.  The good news is it is a beautiful drive along Lake Superior, passes close enough to Cloquet to merit a stop at Gordy's High Hat for some awesome burgers on the way home, and Two Harbors happens to be the home of Lou's Fish House.  Lou has been smoking whatever they can pull out of that lake for years, but in my heart, he'll always be king of one thing...Beef Jerky.  Long before the Evil Cake Genius was a Cake Genius (she's always been a little Evil) she and her now husband, Captain Leisure and their flannel wearing hippie crew of college friends frequently camped along the North Shore, and Lou's was one of the scheduled stops along the way.

I was sure to share this nugget of wisdom with the soon-to-be newlyweds.  Hopefully they took my advice and made the pilgrimage to that Mecca of all things smokey.

So, why is half the fun getting back?  Because getting there is a bitch!  Despite the layers of clothes and cranked up seat warmers, it is a bone-chilling endeavor to deliver a cake my way.  To make things worse, it was pouring rain until we reached Duluth, about 2 1/2 hours from the start.  When we arrived in Two Harbors, the sky had cleared, a huge relief for an outdoor wedding, and we gradually defrosted ourselves while stacking the cake.  The wedding party was around for photos, and we got to meet Jason and even see our bride and groom!  Reluctant to get back in the rolling freezer, we hung out for a little while and watched the ceremony from a window in the reception space.  And then it happened.  We got our answer to the great mystery.  As Shaina walked down the aisle we watched her brother beaming with joy.  Motive number three...a big brother sharing in his little sister's happiness....it was all over his face. 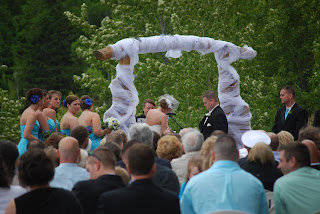 So, mission accomplished, and mystery solved, I kept true to my odd tradition of paying my employees bonuses in meat by loading up Jenna with beef jerky at Lou's followed by a late-lunch at Gordy's...including a brush with burger greatness...Gordy himself was behind the counter!  It took not a minute for the Cake Ladies to seize the day and have our photo taken with the legend himself. 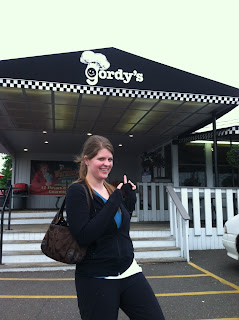 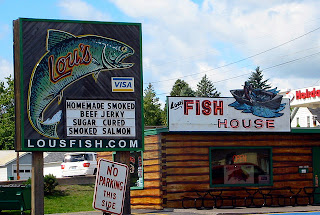 And life on the North Shore is good.